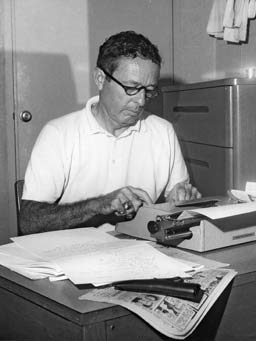 Chuck Heaton was honored with a spot in the Pro Football Hall of Fame in 1980 when he received the prestigious Dick McCann Memorial Award, awarded to one journalist each year for a lifetime of excellence in football reporting. Heaton began writing as a city reporter for the Cleveland Plain Dealer in 1942 and stayed with the paper for 51 years. In 1946 he eagerly accepted a job writing in the sports department and in 1954 began covering the Browns as a football writer. Heaton was one of the first electors to the Hall of Fame in 1963 and served in that role for thirty years. In 1990 he received the Lifetime Achievement Award from the Cleveland Chapter of the Society of Professional Journalists. He was elected to the Cleveland Journalism Hall of Fame in 1992. He retired from The Plain Dealer on October 1, 1993. He was chosen by Leroy Kelly to be his presenter when Kelly was inducted into the Hall of Fame in 1994.