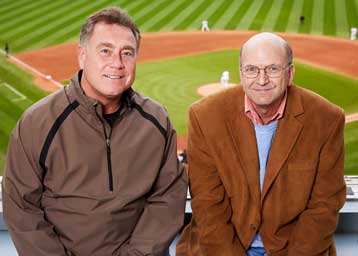 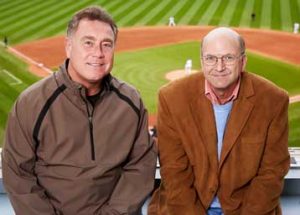 Tom Hamilton, the “Voice of the Indians,” will enter his 25th season of calling Cleveland Indians baseball games on the radio in 2014. In his 24 seasons since 1990, Hamilton has called all 69 postseason games the Indians have played over that span, including the 1995 and 1997 World Series’. His 24-year tenure is the second-longest in club history next to his former partner, Herb Score (34 years, 1964-97).

Hamilton is joined in the booth by Jim Rosenhaus, providing action and commentary for all 162 regular season games and 15 spring training contests on News Radio WTAM 1100, 100.7FM WMMS and the Indians Radio Network.

Tom came to the Indians after spending three seasons as a broadcaster for the AAA Columbus Clippers (1987-89), then the top farm club of the New York Yankees. Previously, Tom worked in Milwaukee, Appleton, Watertown and Shell Lake, Wisconsin.

Some of his broadcasting credits include the University of Wisconsin football games, University of Colorado basketball games, the Appleton Foxes minor league baseball games and work for ABC radio. He is a six-time recipient of the Ohio Sportscaster of the Year Award (1997, 2000, 2001, 2004, 2006 and 2013). During the off-season, Tom does television basketball broadcasts for the Big Ten Conference on the Big Ten Network. In honor of his 20th season with the Indians, Tom was given the Cleveland Association of Broadcasters Hall of Fame Award for 2009.

Hamilton is a native of Waterloo, Wisconsin. He resides in Avon Lake, Ohio with his wife, Wendy. The Hamiltons have four children: Two boys, Nicholas and Bradley, and two girls, Kelsey and Katie. Nick recently graduated from Kent State University, where he was a key member of 2012 College World Series qualifying Kent Golden Flashes and is currently playing in the Indians Minor League system. Brad will enroll at Kent in the fall on a baseball scholarship.