My Favorite Stories from 47 Years on Cleveland TV

A beloved Cleveland TV legend tells funny and surprising stories from a lifetime in television. “Big Chuck” collaborated with Ernie Anderson on the groundbreaking “Ghoulardi” show and continued to host a late-night show across four decades—the longest such run in TV history. Packed with behind-the-scenes details about TV and celebrities.

“A vivid picture of an honest man in the insane world of television. Highly recommended.” — Midwest Book Review

Since 1960, Chuck has been on camera, behind the camera, and in the director’s chair. He collaborated with Ernie Anderson on the groundbreaking “Ghoulardi” show, and continued to host a late-night show across four decades—the longest such run in TV history. He wrote and directed two thousand hilarious sketches that were watched religiously by adoring fans.

Revisit favorite characters including the Kielbasy Kid, Certain Ethnic Guy, Ben Crazy, and many more. Chuck’s stories will entertain fans—and anyone who enjoys behind-the-scenes tales of television and celebrities.

The TV Light is Lit

Live and Local on TV8

With the Browns and the Tribe

From Ghouli To Hoolie

Rowdy and the Kid

Moving Up but Not Out

That was a Close One

Some Time with the Browns

From Fats to Tex 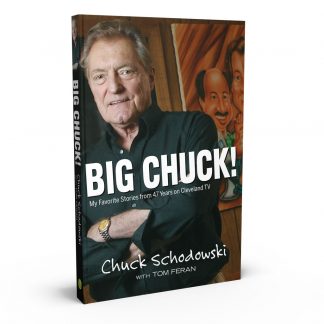