The definitive story of a classical music legend. Tells how a midwestern U.S. orchestra rose amid gritty Big Industry to become a titan in the world of Big Art. Describes how decisions were made along the often bumpy road to artistic and financial success. With plenty of anecdotes and intriguing behind-the-scenes details.

“One of the very best books ever written about a symphony orchestra.” — Tim Page, 1997 recipient of the Pulitzer Prize for Criticism for his writings on music for the Washington Post.

How did a late-blooming midwestern orchestra rise amid gritty Big Industry to become a titan in the world of Big Art? This groundbreaking book tells the complete story of the people and events that shaped the Cleveland Orchestra into a classical music legend.

It’s a story of indomitable founders like iron-willed impresario Adella Prentiss Hughes (the first woman to manage a symphony orchestra) and shrewd, wealthy patrons like industrialist John L. Severance. Of dedicated musicians and driven conductors—like colorful Artur Rodzinski (who packed a loaded pistol during every performance) and authoritarian genius George Szell, who drilled into his orchestra the awesome precision for which it is still renowned (and who even told his players how to dress and the cleaning ladies at Severance Hall what brand of toilet paper to stock).

These musicians, maestros, managers, and patrons fought relentlessly to earn and maintain a reputation for near-perfect performance—in a true virtuoso performance.

Donald Rosenberg taps the most authoritative sources and tells a complex, sweeping success story in very human terms, with an eye for its telling details and a feel for its true drama. Told with plenty of anecdotes and intriguing behind-the-scenes details. 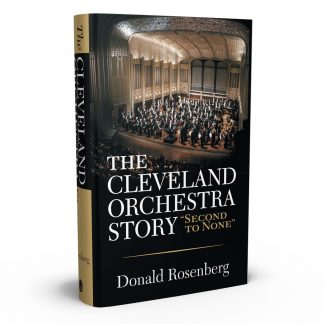