Clevelanders who grew up with Rock and Roll in the 1960s, ’70s, and ’80s remember a golden age, with clubs like the Agora, trendsetting radio stations WIXY 1260 and WMMS, Coffee Break Concerts, The World Series of Rock. Includes first-person stories by fans, musicians, DJs, reporters, club owners, and more, with rare photos and memorabilia.

Music fans who grew up with Rock and Roll in Cleveland remember a golden age. We were young, so was the music, and the sense of freedom and excitement the Rock and Roll scene delivered was electric. This book collects the favorite memories of Clevelanders who made that scene: fans, musicians, DJs, reporters, club owners, and more.

There were so many great clubs, like the Agora, where every big band seemed to break in the 1970s. The trendsetting radio stations, from A.M.’s WIXY 1260 to F.M.’s groundbreaking “Home of the Buzzard”, WMMS. And all those memorable shows. The free Coffee Break Concerts—remember Springsteen just when he hit it big? The gigantic World Series of Rock. Nights on the lawn at Blossom (including local favorites the Michael Stanley Band and their record-setting sellout streak).

Includes rare photographs and other memorabilia such as concert posters, bumper stickers, pins, and ticket stubs.

2. Shakin’ All Over: The British Invade Cleveland

3. Passing Through, Plugging In: National Acts

4. So You Wanna Be a Rock and Roll Star: Local Legends

5. In the Trenches: Other Local Acts

7. Fanning the Flames: Music and the Media 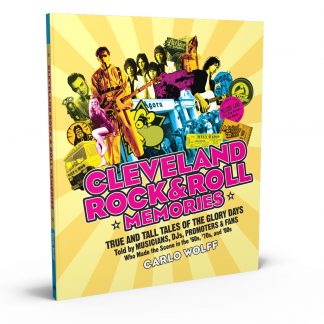 You're viewing: Cleveland Rock and Roll Memories $19.95
Add to cart