More Stories from the Golden Age of Local Television

More behind-the-screen stories from Cleveland TV history (1960s-’90s), including the rise of glamorous news anchors with big hair and perky noses, battling horror-movie hosts, investigative reporters stalking wrongdoers on both sides of the law, a daytime host’s bizarre scandal, a mayor who co-hosted with a ventriloquist’s dummy, and much more.

More behind-the-screen stories from the golden age of local television!

Let’s warm up the old family TV set, step through the screen, and see what was going on behind the scenes with some of our favorite Cleveland television personalities of the 1970s, ’80s, and ’90s. We’ll look back at the rise of glamorous news anchors (including more than one Miss America contestant) with perfect smiles, perky noses, and really big hair . . . Late-night horror-movie hosts battling to take over the legacy of the legendary Ghoulardi . . . The strange, sad saga of the former daytime host who shot himself after a bizarre sex scandal . . .  A weatherman who was a lightning rod for coworkers’ endless practical jokes . . . The investigative reporters whose sting operations caught wrongdoers with their pants down—sometimes literally! . . . The gutsy reporter who interviewed Danny Greene hours before the mobster was blown up in his car . . . The Cleveland mayor who co-hosted a children’s show with a ventriloquist’s dummy . . . and many other true tales.

Ernie’s Legacy (Following in the Footsteps of “Ghoulardi”)

“You can never wipe out a sex scandal” (The Strange, Sad Saga of Joel Rose)

“We’re number three!” (Getting Into the TV News Biz)

“You’ll be lucky if any of you leave my office with a job!” (Channel 5 Reports the End of the Cleveland Press)

“You should know better than to be here.” (TV Reporters and Dangerous Locations)

A Fine Line Between Serious and Silly (Sports and Weather)

“Supe’s On!” (Marty Sullivan and Superhost)

“We told everybody they’re going to be offended.” (WEWS Takes Heat for Grisly Footage)

Not Making Many Friends (Investigative Reporters)

“In my life, laundry and glamour don’t mix!” (Dorothy Fuldheim Was Tough to the End) 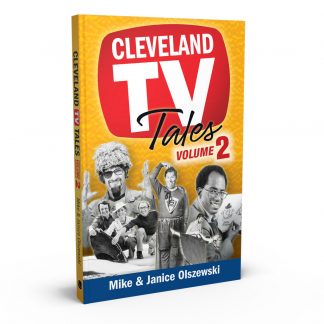