An anthology of the 15 best true disaster stories from the popular book series by John Stark Bellamy II. Revisit the most terrible tragedies in Cleveland history, including:

• The apocalyptic East Ohio Gas Company explosion and fire of 1944, which destroyed an entire east side neighborhood;

• The unspeakably horrible Collinwood school fire of 1908, in which 172 schoolchildren perished in panic because of obstructed exits;

• The Cleveland Clinic disaster of 1929, in which thousands of pounds of X-ray film exploded in flames, causing 123 deaths;

“We are going down!” (The Ashtabula Bridge Disaster)

Death in the Deep Pit (The Terminal Tower Tragedy)

“Horror of All Horrors!” (The Central Viaduct Disaster) 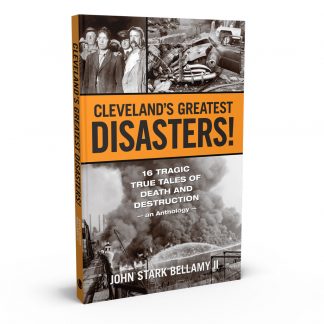 You're viewing: Cleveland’s Greatest Disasters! $14.95
Rated 0 out of 5
Select options