How LeBron James Came Home and Brought a Championship to Cleveland

LeBron James came home on a mission: Lead the Cavaliers to the NBA Finals and give Cleveland fans their first title in 52 years. Could the star restore his reputation, revive the franchise, and reward the fans? In 2016, down 3-1 in the Finals, he and the Cavs launched an epic comeback and delivered glory. Cleveland’s top sportswriter tells how.

This dramatic homecoming tale recounts one of the greatest sports stories in Cleveland history — how LeBron James and the Cavaliers took fans on a roller coaster ride from despair to hope to the brink of disaster and, finally, to glory as the 2016 NBA champions.

Fans felt gut-punched in 2010 when local hero and MVP LeBron James announced he was leaving the Cavaliers and Northeast Ohio for Miami. The Cavs nose-dived in the standings and struggled to recover.

Then, in June 2014, LeBron announced he was coming home. And he had a mission: Lead the Cavaliers to the NBA Finals and give Cleveland its first championship in 52 years.

But would LeBron’s return be enough to restore his reputation, revive the franchise, and reward the fans with a title?

Veteran Cleveland sportswriter Terry Pluto tells how it all happened . . .

Pluto tells it all with insightful analysis, extensive front-office details, and a deep empathy for the fans. 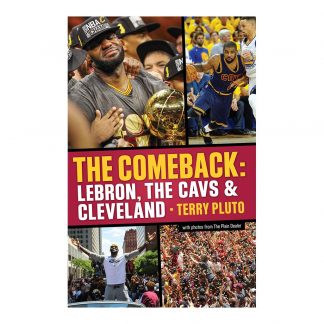