The Corpse in the Cellar

And Further Tales of Cleveland Woe

The third book in Bellamy’s popular series delivers 25 more true stories of Cleveland crime and disaster. Includes crotchety vigilante Jarvis Meach, who shot down robbers in cold blood; wicked stepmother Mary Garrett, who locked her stepdaughters in their bedroom and set fire to the house; the great Ashtabula bridge disaster; and more.

“Bellamy writes with razor-edged wit and his own particular brand of charm.” — Medina County Gazette

The third book in this popular series delivers 25 more incredible but true stories of Cleveland crime and disaster, including:

• Medina’s Wickedest Stepmother, Mary Garrett, who locked her stepdaughters in their bedroom, set fire to the house, and did all she could to get the furniture out unharmed.

• The horrible Ashtabula Bridge Disaster, which killed more than 80 holiday travelers trapped in a fiery inferno after their passenger train plunged 82 feet to the snow-covered ground;

• The strange death of Minnie Peters, who bashed in her own head with her husband’s machinist’s hammer in a most gruesome act of suicide;

• Cleveland’s saddest circus, when 15 minutes of raging fire killed more than 50 animals. The show went on again that evening;

Bellamy’s signature style brings to life the colorful characters who took part in some of Cleveland’s most exciting and tragic moments. Crooks and cops, heroes and villains, ordinary folks who found themselves in extraordinary circumstances. 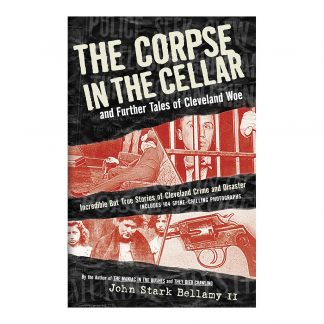