The Curse of Rocky Colavito

A Loving Look at a Thirty-Year Slump

A baseball classic. No sports fans suffered more miserable teams for more seasons than Indians fans of the 1960s, ’70s, and ’80s. Here’s a fond and often humorous look back at “the bad old days” of the Tribe. The definitive book about the Indians of that generation, and a great piece of sports history writing.

“The year’s funniest and most insightful baseball book.” — Chicago Tribune

A classic look at those years of baseball futility and frustration that make the rare taste of success so much sweeter.

Any team can have an off-decade. But three in a row? Only in Cleveland. No sports fans suffered more miserable teams for more seasons than Indians fans of the 1960s, ’70s, and ’80s. Terry Pluto takes a fond and often humorous look at “the bad old days” of the Tribe and finds plenty of great stories for fans to commiserate with.

Other teams lose players to injuries; the Indians lost them to alcoholism (Sam McDowell), a nervous breakdown (Tony Horton), and the pro golf tour (Ken Harrelson). They even had to trade young Dennis Eckersley (a future Hall-of-Famer) because his wife fell in love with his best friend and teammate.

Pluto profiles the men who made the Indians what they were, for better or worse, including Gabe Paul, the underfunded and overmatched general manager; Herb Score, the much-loved master of malaprops in the broadcast booth; Andre Thornton, who weathered personal tragedies and stood as one of the few hitting stalwarts on some terrible teams; and Super Joe Charboneau, who blazed across the American League as a rookie but flamed out the following season.

Long-suffering Indians fans finally got an exciting, star-studded, winning team in the second half of the 1990s. But this book still stands as the definitive story of that generation of Tribe fans—and a great piece of sports history writing.

2. Trader to the Cause

3. A Slump of a Thousand Years Begins with One Loss

13. Gabe Paul and the Money Men

14. Whatever Happened to Super Joe?

15. Watch What You Wish For

16. The Conscience of the Indians

19. Putting the Pieces Together

20. The Past Meets the Future 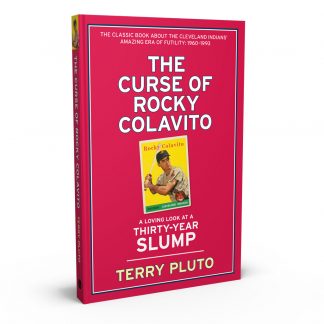