Curses! Why Cleveland Sports Fans Deserve to Be Miserable

A light-hearted look at Cleveland sports misery, including the worst drought in professional sports championships, The Fumble, The Drive, The Shot, Game Seven . . . We’ve endured enough bad luck, dumb trades, dud draft picks, and crazy moments to keep us crying in our beers for decades. This book offers a little humor to go with the groans!

Here’s one championship title we Cleveland fans can grasp and proudly hold aloft: Most Miserable.

Boston fans no longer have their Curse to bemoan—and anyway, they’ve got those Patriots Super Bowl trophies. (Aargh!—Bill Belichick!) Chicago fans? Don’t start. The Cubs, yes—but what about all those unbeatable Bulls teams? (Ugh!—The Shot!) No, Cleveland owns bragging rights when it comes to the worst drought in professional sports championships. And it’s not just The Fumble, The Drive, The Catch, Game Seven, and all our other big-game losses. We’ve endured enough bad luck, dumb trades, dud draft picks, and just plain goofy moments to keep us crying in our beers for decades. And they’re all collected here.

Could this little book end the worst championship drought in major league sports? Honestly, no. But it will give you something fun to read while you’re waiting for the Browns, the Tribe, the Cavs, or someone in Cleveland to finally win the Big One!

It may not take away the misery, but at least it offers a little humor to go with the groans! 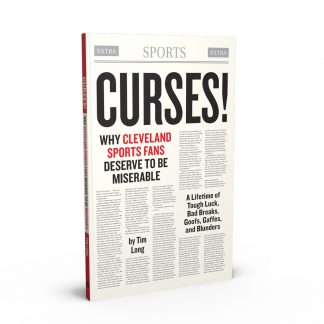 You're viewing: Curses! Why Cleveland Sports Fans Deserve to Be Miserable $9.95
Add to cart