The Rescue, Hamburgers, White Folks, and Instant Celebrity . . . What You Saw on TV Doesn’t Begin to Tell the Story . . .

From dishwasher to international celebrity in one afternoon . . . Charles Ramsey delivers a roller coaster account of his life before, during, and after the dramatic rescue of three kidnapped women in Cleveland on May 6, 2013. With blunt opinions on race, class, and more, it’s a wild, eye-opening tale told with a sharp sense of humor.

From dishwasher to international celebrity in one afternoon . . . Charles Ramsey gives a roller coaster account of his life before, during, and after the dramatic rescue of three kidnapped women in Cleveland . . .

Global news media declared him a hero. Well-wishers mobbed him. The Internet made him a viral sensation. It couldn’t have happened to a less likely guy. Now, read how it all went down.

Ramsey was in the wrong place at the right time when he answered a young woman’s cry for help, kicked in his neighbor’s locked front door, and got her the hell out of there—leading to the astonishing rescue of three young women—Amanda Berry, Gina DeJesus, and Michelle Knight—who had been missing for a decade.

Reporters and TV cameras flocked to a neighborhood—and a man—they otherwise would have ignored. Ramsey was ready, with plenty to say.

“Bro, I knew something was wrong when a little pretty white girl ran into a black man’s arms . . . Dead giveaway.” It was a quote that launched a thousand Internet memes . . .

In this book Ramsey walks us step-by-step through the day of the rescue and talks about living right next door to Ariel Castro—outwardly charming, secretly a monster.

He tells about life before the rescue—growing up a privileged black kid in a white suburb, seeking out trouble over and over, getting kicked out of school, selling drugs, going to prison, and ultimately finding work as a dishwasher and landing by chance on gritty Seymour Avenue.

And he shares what it’s like to become an instant celebrity, when suddenly everybody wants a piece of you. (For example, he learned the hard way that when a big TV network flies you to New York City for an interview, that doesn’t mean they also bought you a ticket back home to Cleveland!)

This is a wild, eye-opening tale told with a sharp sense of humor.

Let the Love Live On 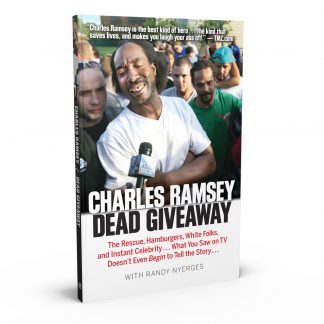