Inside the Front Office and the Process of Rebuilding a Contender

An in-depth, inside look at how the Cleveland Indians’ front office took their team apart and rebuilt to become contenders again in spite of modern baseball’s competitive imbalance. Veteran sportswriter Terry Pluto had unprecedented access. He delivers a wealth of detail that will intrigue serious fans and fantasy leaguers.

“Fair, honest and insightful throughout . . . The book is a compelling look at the Indians’ organizational thought process in what has become a challenging baseball market.” — MLB.com

For Indians fans who want to know what goes on inside the front office, this book tells all. It’s an in-depth look at how the team was taken apart and rebuilt as a contender again in spite of Major League Baseball’s competitive imbalance.

Tribe fans grew accustomed to winning in the late 1990s. They had an owner with deep pockets, a brand-new ballpark, and a team of All-Stars who delivered a division championship nearly every year. Then, in 2002, the team’s new owners began a controversial plan to unload their popular but expensive stars and replace them with a steady stream of young prospects and veteran rehab projects. Critics scoffed, and fans stayed away.

But by 2005 the plan showed promise with a 95-win season. And in 2007 it paid off, as the Indians beat the top-dollar Yankees in the playoffs and came within one game of the World Series—with a payroll less than half that of their competition.

How did they do it? Veteran sportswriter Terry Pluto (who had unprecedented access to the Indians front office) carefully analyzes each big decision and tells which ones worked, which ones didn’t, and why. This rare behind-the-scenes look at a modern front office will intrigue any fan fascinated by baseball deal-making.

A wealth of baseball detail that will intrigue serious fans and fantasy leaguers.

Introduction: “No one knew what was coming.”

2. “You can’t wait for the right time to buy the Indians.” (The Dolan Family Takes Over)

3. “Manny’s free agency was a circus.” (The Departure of Manny Ramirez)

4. “We didn’t have enough fingers for all the leaks.” (The Roberto Alomar Trade)

5. “Free-agent fascination” (Where Did All the Prospects Go?)

7. “Fans were screaming at us.” (Taking Heat While Gathering Young Talent)

8. “If the Indians can’t keep this guy, they won’t keep anyone.” (Jim Thome Leaves)

10. “Do you want to stand for something?” (Vision and Values)

11. “What will it say to the other players?” (The Milton Bradley Dilemma)

14. There’s Always One More Deal (“I don’t just want to have a good year, I want to get to the playoffs every year.”) 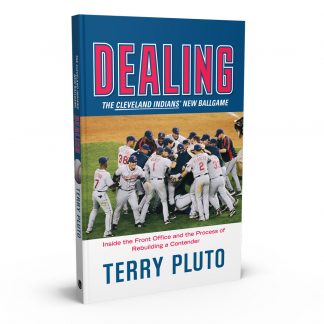