And Other True Tales of Crime & Disaster from Cleveland’s Past

The 5th book in Bellamy’s popular series delivers 26 more tales of Cleveland crimes and disasters. Includes one of Cleveland’s most baffling murder mysteries: the brutal murder of 16-year-old Beverly Jarosz in her suburban bedroom. Bellamy’s stories are meticulously researched and delivered in a literate and entertaining style.

“Has more than its fair share of violence, sex, debauchery and reversals of fortune . . . But what emerges between the lines are stories of human suffering, stories of class struggle, stories that speak as much to the criminal mind as to the crime itself.” — Sun Newspapers

More true tales of woe from Cleveland’s crime and disaster expert. The fifth book in John Stark Bellamy’s popular series delivers 26 accounts of Cleveland-area crimes and disasters from 1900 through 1950, including:

• The depression-era “Blue Book Murder,” in which a swank Shaker Heights society party was interrupted by low-class thugs with deadly intentions;

• Truculent barkeep Thomas Martin, whose idea of a good time was shooting the lunch buckets out of unsuspecting laborers’ hands as they came off their Whiskey Island shifts;

• A strange international photo hoax in which Lakewood lad John May Warren became “The boy with Hitler’s face”;

• Sleepwalking Harry Krause, who dreamt one night of battling a gigantic snake but awoke to the real nightmare: he had strangled his own beloved mother in her bed;

• The shocking murder of sweet 16-year-old Beverly Jarosz in her Garfield Heights bedroom—one of Cleveland’s most baffling murder mysteries ever; 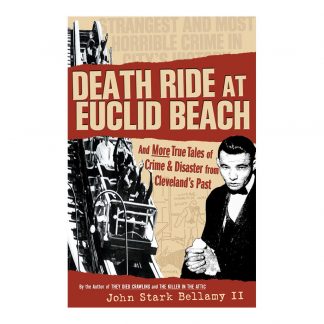 You're viewing: Death Ride at Euclid Beach $15.95
Add to cart