#12 in the Milan Jacovich mystery series. When a young woman’s broken body is found 150 feet below the Lorain-Carnegie Bridge in downtown Cleveland, Police call it suicide. But the grieving father hires Milan to investigate. The search for the truth leads Milan to a sinister web of lies and sordid behavior—and a most brutal and heinous crime.

In street parlance, “the dutch” is another expression for suicide. That’s what everyone assumes happened to Ellen Carnine when her broken body is found 150 feet below the Lorain-Carnegie Bridge in downtown Cleveland. A terse, sad suicide note has been left on the screen of her home computer.

But her grieving father asks private eye Milan Jacovich (it’s pronounced MY-lan YOCK-ovitch) to figure out why a bright and successful, dot-com executive like Ellen took her own life. Milan is introduced to a different reality by Ellen’s four best female friends, an old lover, her employers, and some of the lowlifes from Cleveland’s meanest streets.

The search for the truth leads Milan into the unfamiliar territory of Internet chat rooms, where he learns a great deal about the faceless people who live part of their lives behind a screen, becoming best friends—or bitter enemies—without actually meeting.

Milan pushes too far—and uncovers the most brutal and ­heinous crime he’s ever faced. 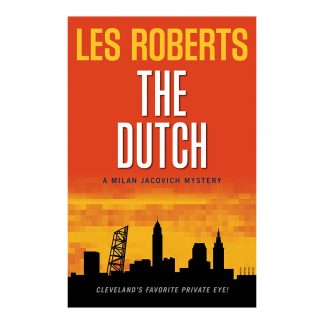