How the New Browns Were Set Up to Fail

A hard look at the unhappy beginnings of the post-1999 Cleveland Browns franchise, this book chronicles the backroom deals, big-money power plays, poor decisions, and plain bad luck that dogged the venerable franchise after Art Modell skipped town in 1995. How long should fans have to wait for a winner? A book the NFL does not want you to read.

“[A book] NFL fans in general and Browns’ fans in particular will definitely want to read . . . a fascinating, behind-the-scenes look at how the new Browns were created and what’s kept them from making the progress everyone expected.” — Houston Chronicle

Browns fans: Your team never had a chance.

That’s what Terry Pluto, one of Cleveland’s top sportswriters, realized after taking a hard look at the unhappy beginnings of the new Cleveland Browns franchise. This book chronicles what he found: backroom deals, big-money power plays, poor decisions, and plain bad luck that have dogged the venerable team ever since Art Modell skipped town in 1995.

When the new Cleveland Browns took the field in 1999, it was supposed to be the dawn of a grand new era of football in Cleveland. Instead, it was a rude wakeup call.

Legions of loyal fans—once heartsick, abandoned, and disgusted at the loss of their team in 1995—were ready to forgive the past and embrace the future . . . a new owner, a new team, a new stadium. They just wanted their Browns back. But it soon became clear: Browns fans got a bum deal. The NFL had traded one of the most storied teams in football history for a franchise mired in mediocrity.

These fans, after owner Art Modell skipped town with their beloved Browns, became the only fans ever to take on the NFL, demand their team back—and win. Yet while they were celebrating the supposed victory that kept “our name, our colors, our team” in Cleveland, fans should have been looking over their shoulders and keeping a close watch on the NFL. There would be few reasons to celebrate in the years to come.

How much longer would they have to wait for a return to glory? Pluto sifts through the clues and looks for answers. This is a book the NFL does not want you to read.

1. Your Team Never Had a Chance

7. “Nothing Went According to Plan”

17. Needing a Reason to Believe 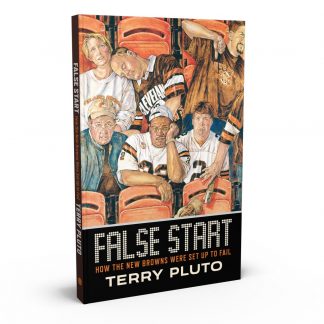