LeBron James and the Remaking of the Cleveland Cavaliers

An in-depth look at how a team and a city were rebuilt around LeBron James. Two award-winning sports journalists tell the converging stories of a struggling franchise and a hometown teenage phenom. Will fascinate basketball fans who want the inside story of a young superstar shouldering the weight of an entire NBA franchise.

“Not your typical sports biography . . . Take[s] the reader behind the scenes in the Cavaliers’ front office, revealing how championship contenders are built” — Library Journal

An in-depth look at how a team and a city were rebuilt around LeBron James . . .

When the Cleveland Cavaliers drew the top pick in the 2003 NBA draft, the entire city buzzed with excitement. How often does a superstar come along? Especially for Cleveland, a midmarket Rust Belt city without a sports championship in forty years. Especially for the Cavaliers, a long-struggling team that had never reached the NBA finals.

Soon, everyone had something riding on LeBron: a billionaire team owner wanting a return on his investment . . . teammates eager for a championship ring . . . the league looking for the next Michael Jordan to promote . . . the shoe company with its record-breaking endorsement deal . . . even popcorn vendors in the stands of Quicken Loans Arena and servers waiting tables at downtown restaurants.

Award-winning sports journalists Terry Pluto and Brian Windhorst tell the converging stories of a struggling franchise and a hometown teenage phenom. This book will fascinate any basketball fan who wants the inside story of how LeBron James became the young superstar shouldering the weight of an entire NBA franchise. 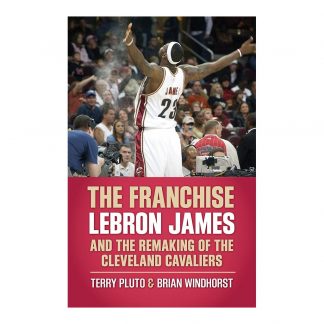