From Captain Penny to Superhost

Tales from the Golden Age of Cleveland Children’s Television, 1950s–1970s

Children’s TV in Cleveland sprang from the creative minds of actors who often made it up as they went, with few special effects but lots of imagination. Barnaby, Woodrow the Woodsman, Franz the Toymaker, Romper Room’s Miss Barbara, Jungle Larry… Their built lifelong bonds with Northeast Ohio kids. These stories offer a glimpse behind the plywood sets and greasepaint …

It was the golden age of children’s television in Cleveland.

Let’s go behind the plywood sets, costumes, and grease paint for a close-up look at some remarkable personalities . . .

Children’s TV once sprang from the creative minds of actors who made it up as they went. Despite their low-budget productions, those classic shows and hosts of the 1950s–1970s formed lasting bonds with generations of Northeast Ohio kids.

Gene Carroll created Cleveland TV’s first kids’ show, “Uncle Jake’s House,” in 1947 with a menagerie of animals (Clarence the cat and Phillip the parrot were an uneasy pair!) and child stars.

Linn Sheldon wanted to be known as a serious actor but became such a hit as an elf—Barnaby—that he could never shake the character.

Woodrow the Woodsman lived in a fantasy forest—but when Clay Conroy lost his Woodrow wig, the story made real newspaper headlines.

“Miss Barbara” Plummer of Cleveland’s “Romper Room” (a franchise produced locally) catered to the kindergarten crowd live on set while all dressed up in full skirts. (“At all times, one had to be a lady.”)

An Uncle, a Kousin—My TV Family! (By Candy Lee Korn)

Schmile at Everybody! (Franz the Toymaker, the Polish Guy with a Swiss Accent)

You Can Fool Some of the People All of the Time . . . (Captain Penny)

The Captain’s Voice (by Dan O’Shannon)

If Wishes Were Horses, Beggars Would Ride (Our Dad, Captain Penny)

From Darkest Africa to Cedar Point (The Adventures of Jungle Larry)

We Became Experts in TV after One Year! (Jim Breslin, from Cowpoke to College Professor)

Have a Good Day Today, and Better Day Tomorrow (The Continuing Tale of Woodrow the Woodsman)

Do What I Do and Get Paid? (A Conversation with Clay Conroy)

The Return of the Woodsman (by Dave and Connie Little)

Growing Up with Barnaby (by Perry Sheldon) 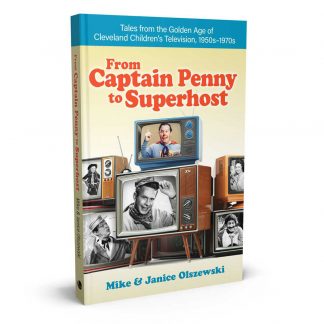 You're viewing: From Captain Penny to Superhost $15.95
Select options