Polyester leisure suit, white patent leather shoes, matching white belt—that 1970s fashion statement was once unkindly dubbed the “full Cleveland.” And no one wears it with more flair and panache than Buddy Bustamente. Buddy (“he was medium-sized if you happened to be talking about Cape buffaloes”) is the hulking flunky assigned by mob kingpin Victor Gaimari to shadow Cleveland private eye Milan Jacovich (it’s pronounced MY-lan YOCK-ovich).

Milan has been hired to find the perpetrator of a low-level scam who is selling local businessmen ads in a magazine that doesn’t exist. But the modest amount of money involved hardly seems worth the string of bodies he soon turns up. And why does it interest a mobster like Victor and his sugar-addict bird dog, Buddy?

Milan starts liking Buddy in spite of himself. But he’s not easily fooled; Buddy is a recent ex-con, and Milan knows that behind the childlike façade and dubious fashion, he is potentially lethal. 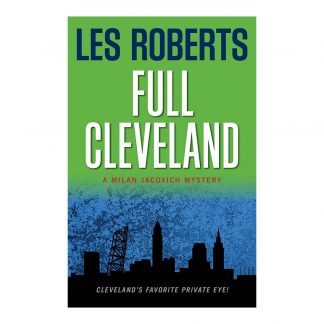