Listen in as dozens of veteran newspaper reporters, editors, and photographers swap favorite tales about life on the job at Cleveland’s newspapers in the 1950s, ’60s, and ’70s—when fierce competition made daily newspapers the most exciting business in town. Funny, tragic, sometimes outrageous, it’s a boisterous look at “the first draft of history.”

Listen in as veteran journalists swap their favorite stories about life on the job at Cleveland’s newspapers during the 1950s, ’60s and ’70s—when fierce competition between the Cleveland Press and the Plain Dealer made daily newspapers the most exciting business in town.

It was a job unlike any other, putting out a daily newspaper for a major city. Back then, the door to the city room was wide open and you never knew who might walk in—strippers, mental patients, circus clowns, the mayor . . . It was an amazing parade.

The best stories didn’t just walk in, though. Reporters wore out shoe leather, jammed dimes into pay phones, pressed their ears to closed doors. Photographers hustled to shoot the action, whether a murder victim or a murderer or the Girl Scout who sold the most cookies.

Now, here are the stories behind the stories, told by the men and women who covered them—investigative reporters, society writers, theater critics, sportswriters, photographers, editors . . .

Their tales are funny, tragic, human and sometimes outrageous. Find out why reporters in those days knew they had the world’s best job. This is a boisterous, inside look at “the first draft of history.”

“Screw the competition.” (The Cleveland Press vs. the Plain Dealer)

Stop the Presses! (The Big Stories)

“It seemed like an easy job . . .” (Getting Started in Newspapers)

“I thought I died and went to heaven.” (Sportswriters)

More Than a Snapshot (Photographers)

“I had to wake up the widows.” (Life on the Death Beat)

“Too many martinis.” (Drinking)

“Don’t mess with the Guild.” (Management and Labor)

“The hobnobbing was fantastic.” (Such Interesting People)

This Job Could Kill You (Hazardous Assignments)

“We understood each other.” (Politics)

“You can’t take this away!” (The End of the Press) 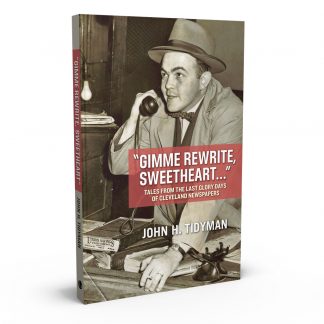