Heart of a Mule

Dick Schafrath shares a lifetime of stories: National football championships with the 1964 Cleveland Browns and the 1957 Ohio State Buckeyes. Four terms in the Ohio senate. He canoed across Lake Erie, met president, wrestled bears. Wild and wonderful, his tales reveal a dedication to hard work and a stubborn determination worthy of a mule.

“Schafrath is a hard-working, stubbornly determined man who never stops looking for a challenge. This message rings loud and clear in his book.” — Madison Messenger

He won national football championships with the 1964 Cleveland Browns and the 1957 Ohio State University Buckeyes. He served four terms in the Ohio senate. He was the first person ever to canoe across Lake Erie. He ran sixty miles nonstop between Cleveland and Wooster, Ohio, on a bet. He met presidents . . . He wrestled bears.

Dick Schafrath sure has plenty of stories to tell.

In this book, he tells the most remarkable stories from his first seventy years. Stories of growing up on an Ohio farm with no plumbing, plowing behind a pair of mules. Of playing alongside famous teammates and coaches—Jim Brown, Paul Brown, Woody Hayes . . . Of political campaigns and publicity stunts. Of returning to Ohio State to finish his undergraduate degree—after fifty years! Of a life dedicated to hard work and a stubborn determination that earned him his longtime nickname, “The Mule.”

Wild and wonderful, told in a warm, personal style, these stories are sure to entertain and inspire.

Life Outside the Lines

Adventures with Family and Friends

The Heart of This Mule 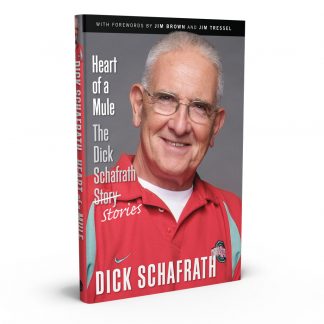