A Cleveland Reporter’s Journey Through the 1960s

Now in paperback! The 1960s were the most turbulent era in Cleveland history—and an exciting time to be a newspaper reporter. This memoir takes you back to the tumult with an eyewitness account by a veteran journalist who, as a young hotshot reporter, covered the major events of the day: civil rights violence, corruption and crime, Vietnam, Kent State, and more.

The 1960s were the most turbulent era in Cleveland history—and an exciting time to be a newspaper reporter. This memoir takes you back to the tumult. It’s an eyewitness account by a veteran journalist who, as an ambitious young reporter, covered the major events of the day: civil rights violence, corruption and crime, Vietnam, Kent State, and more.

Cleveland was already changing by the beginning of the 1960s. Racial unrest, migration to the suburbs and the decline of its once-mighty industrial base reshaped the city’s politics and population. Cleveland found itself at the forefront of social upheaval that would sweep the nation and alter America.

In those days, a journalist could find a story that reflected the times down the street or around the world. Reporting for the Plain Dealer, Michael D. Roberts covered a decade of destruction, death and dissension—from the riots on Cleveland’s East Side to the Tet Offensive in Vietnam, the aftermath of the Six-Day War in the Middle East and the tragedy of the Kent State shootings.

There were enlightened moments, too. For a good part of that decade the eyes of the nation were on Cleveland, watching whether it would elect the first African American mayor of a major American city. It did, in Carl B. Stokes.

It was also the last golden hour of print newspapers—although they didn’t know it yet. Technology had not yet altered the business. All a journalist needed was a pen, a notebook, a typewriter, a pay phone and a pocketful of change. Television was only just beginning to make a serious impact on news reporting.

Newspapers were a unifying force in communities, a friendly visitor that arrived on your doorstop every day. But by decade’s end, the spirit of revolt would come to haunt the newspaper and pluck both the verve and the soul from it.

For a reporter in search of a big story, though, bad times were also the best of times. This is the way it was.

A Beer and a Byline

A Bad Address and a Bit of Luck

Death Does the Holidays

Changing of the Guard

That Other Side of Town

A Summer with Art Modell

A Bad Day at the Café

The Day the Paper Cured Cancer

Carl Stokes and the Changing City

We Need You to Look In On the War

You Would Be a Fool to Go

The Odds and Ends of War Reporting

On to the Pyramids

Of All Places, Kent State

Going to the Dark Side 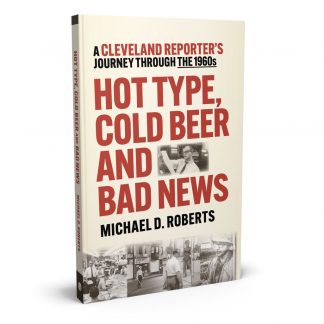