Joe Tait: It's Been a Real Ball

Legendary broadcaster Joe Tait is like an old family friend to three generations of Cleveland sports fans. This book celebrates the inspiring career of “the Voice of the Cleveland Cavaliers” with stories from Joe and dozens of fans, colleagues, and players. Hits the highlights of a long career and also uncovers some touching personal details.

“An easy, fun book to read and will surely bring back good memories for Cleveland sports fans who listened to Tait’s trademark calls since 1970.” — 20SecondTimeout.com

Joe Tait is like a family friend to three generations of Cleveland sports fans. This book celebrates his Hall-of-Fame broadcasting career with stories from Joe and dozens of fans, media colleagues, and players.

He was “the Voice of the Cleveland Cavaliers.” But to fans, Joe was also “one of us.” Cavs basketball, Indians baseball, or Mount Union football, he made the game come alive, and wasn’t afraid to speak his mind—even when it might get him in trouble with the coach or the owner.

In high school, Joe loved sports but wasn’t always good enough to make the team. Then he discovered play-by-play announcing. Combining two passions, he began to carefully build a broadcasting career that would eventually touch the lives of countless other sports fans.

Pluto weaves a roughly chronological narrative that hits the highlights of a long career. It also uncovers some touching personal details. For example, one chapter describes how Joe’s father, a stern man with a deep-rooted distrust of black people, came to become good friends with Cavaliers center Nate Thurmond, to Joe’s surprise and delight.

With fans, Joe was often more popular than the players on the court—especially during the Cavs’ dimmer days. When notoriously incompetent team owner Ted Stepien fired Joe in the 1980s, fans protested and staged a rally in his honor. When new owner Gordon Gund took over the team, the first thing did was hire Joe back. “He is the franchise,” Gund said. “To have a basketball team in Cleveland, you have to have Joe Tait.”

His work inspired a generation of young broadcasters. Language he invented became part of the common broadcast language in Northeast Ohio. “Left to right on your radio dial” . . . “Wham, with the right hand” . . . “It’s a beautiful day for baseball!” . . . “To the line, to the lane . . .”

The stories in this book will make fans feel like they’re sitting alongside Joe enjoying a play-by-play recap of the remarkable career they shared together.

(Almost) Working on the Railroad

At Least He Could Talk a Good Game

Spying on the Russians

Fans Write In: Sitting Behind Joe

Joe Teams Up With Bill Fitch

Fans Write In: Joe and Baseball

Fans Write In: More on the Miracle

When I Became Joe Tait’s Editor (by Mark Mosgrove)

If Only Pete Franklin Hadn’t Gone to the Dentist

A Hall of Fame Voice (by Frank Kurtz)

Shawn Kemp and the New NBA

Working With Joe (by Scott Zurilla)

Have a Good Night, Everybody 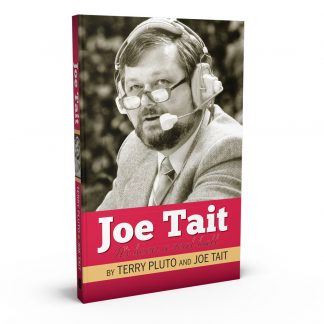