The Last Days of Cleveland

#6 in this Cleveland crime and disaster series includes 15 stories. Sometimes gruesome, often surprising, these tales are meticulously researched and delivered in a literate and entertaining style. Meet a daring Jazz Age stick-up man, a murderous grandmother, an ageless fire chief addicted to profanity, and other unforgettable characters.

“Heroes and rogues fill the pages of this book. The stories will hold your attention and chill you to the bone.” — Crime Shadow News

Cleveland’s master of historical crime and disaster returns with 15 more true tales in this sixth volume of his popular series, including . . .

• West Park sisters Helen, 11, and Marguerite, 10, who died after eating Rough-on-Rats brand poison in their grandmother’s basement— victims of a genetic “suicide mania,” or driven to death by the cruelest caretaker since Hansel and Gretel’s stepmom?

• Joseph “Specs” Russell, who vaulted to fame in the summer of 1927 by staging as many as 52 stick-ups and making fools of Cleveland lawmen with his “impossible” escapes from their dragnets;

• Jeanette McAdams—just unlucky, or the Lucretia Borgia of Ashtabula County? After the suspiciously similar deaths of her five siblings, neighbors began to take note of the crowded family graveyard;

• Salty and ageless George Wallace, who served the city as a fireman for 62 years, 30 of them as chief, and endured to become the oldest fire chief in the world—with a mastery of incessant profanity that could be heard for four city blocks and made mule skinners blush;

And more true stories of courage, fear, deception, and villainy—including a disaster caused by the author himself!

4. “I Die an Innocent Man!” (The Gruesome Death of William Beatson)

6. Cleveland’s First Disasters (The Perils of Ben, and His Startling Escape; A Tragic Voyage)

7. Murder on the Shaker Road (The Strange Deaths of John and Josiah White)

9. The Last Days of Cleveland (The 1925 Adventist Hysteria)

10. All Unhappy Families Are Not Alike (The Ashtabula McAdams Family Values)

12. Shabby Death on Sheriff Street (The Murder of Louis Weik)

15. My First Disaster (How I Got to Be “The Cleveland Historian Your Mother Warned You About”) 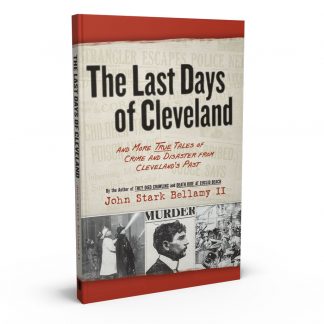