What it Means to Be a Cleveland Browns Fan

Only 3 left in stock

What is this madness all about? Anyone who has experienced it knows: being a Cleveland Browns fan is just different.

Why are we the only fans in the nation who ever lost their team, demanded it back—and got it? Why did three seasons without football fail even to dampen the enthusiasm? Why have we endured years of heartache (The Fumble, The Drive, “Red Right 88” . . .) yet grown ever more attached to the experience?

These 33 essays hold the answer. Scott Huler’s nostalgic memoirs, and his interviews with Browns legends and other fans, uncover those essential, special elements of shared experience that define what being a Browns fan has meant for us all.

This odyssey takes Browns fans back to some wonderful places. It revives some truly heartbreaking moments. And it looks to the future with great hope.

“We always traveled first class”: A Moment with Lou Groza

“It can’t be just a bunch of guys in brown uniforms”: A Moment with Jim Brown

Brown on Brown: A Moment with Mike Brown

“I gave it my best”: A Moment with Mike Phipps

“I see what Paul Brown saw”: A Moment with Paul Warfield

“For those four hours I hated my friends”: A Moment with Greg Pruitt

Almostness: A Moment with Brian Sipe

Out of Town Brown: A Moment with Harold Manson

“All I remember is being a Browns fan”: A Moment with Bernie Kosar

A Moment with Bob Grace and Jeff Wagner

The Drive, the Fumble, and All That

“No team will ever do that again”: A Moment with Otto Graham

Rumors of War and the Last Pittsburgh Game

Big Dawg and the Man in the Brown Suit

“It was just a spirit thing”: A Moment with Earnest Byner

I Have Raked My Last Leaf

The View from the Tunnel: A Few Words from Jerry Sherk 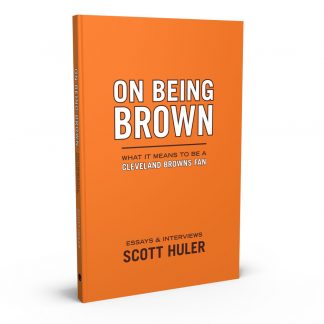