And Other True Stories of Cleveland's Most Intriguing Unsolved Crimes

Only 1 left in stock

An investigative journalist cracks open 13 of Northeast Ohio’s most intriguing unsolved crimes, including the 1964 murder of Garfield Heights teen Beverly Jarosz; the West Side disappearances of Georgina DeJesus and Amanda Berry; the mysterious suicide (or murder?) of Joseph Kupchik; and ten other equally haunting tales.

“James Renner is genuine. He cares about these victims . . . When it comes to true crime, this is the kind of writer we need.” — Crime Shadow News

Presenting the most notorious unsolved crimes in Northeast Ohio . . . Investigative reporter James Renner reopens cold cases and delves into dark secrets that have baffled Clevelanders for years, including:

• Murder—Sixteen-year-old Beverly Jarosz felt a dark foreboding in the months before she was stabbed to death in her quiet Garfield Heights home. It all started with an anonymous gift.

• Stolen Identity—Joseph Newton Chandler of Eastlake was not who he claimed to be. Some think he was the Zodiac killer; others say he was D.B. Cooper, or even Jim Morrison.

• Suicide or murder?—Joseph Kupchik hid gambling problems from friends and family until he was found at the bottom of a nine-story parking deck in downtown Cleveland—with multiple stab wounds.

• Heist—In 1969, Lakewood bank employee Ted Conrad nabbed $215,000 from the vault one day after his twentieth birthday. The FBI still shows up at his high school reunions.

• Controversy—Jeffrey Krotine was thrice tried for the grisly 2003 murder of his wife and ultimately acquitted, to the frustration of Cuyahoga County prosecutors, detectives, and even jurors.

These stories venture into dark alleys and seedy strip clubs, as well as comfortable suburbs and cozy small towns, where some of the region’s most horrendous crimes have occurred. Renner’s unblinking eye for detail and unwavering search for the truth make this book a gripping read.

1. Dream a Little Dream of Me: The Unsolved Murder of Joseph Kupchik

2. Time is Death Itself: The Unsolved Murder of Beverly Jarosz

3. The River’s Edge: The Unsolved Disappearance of Ray Gricar

5. The Not So Innocent Victim: The Unsolved Murder of Tony Daniels

7. Third Time’s a Charm: The Unsolved Murder of Ramona Krotine

8. The Battle of Shaker Heights: The Unsolved Murder of Lisa Pruett

9. A Killer Comes to Pancaketown: The Unsolved Murder of Dan Ott 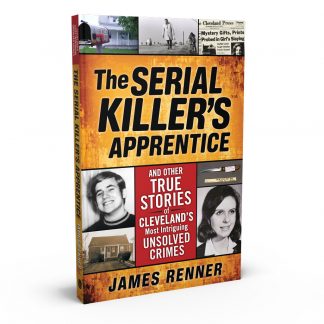