#19 in the Milan Jacovich mystery series. When a celebrity-packed motivational event turns deadly, Milan finds himself caught up in a mess. The high-profile, big-ego speakers he’s hired to help protect can’t stand each other, and when one winds up murdered, Milan is asked to help another prove his innocence by finding the real killer.

Milan and his associate Kevin “K.O.” O’Bannion are hired as extra security for several high-profile inspirational speakers at a convention in downtown Cleveland, where they get off to a rocky start. Each special guest seems more unpleasant than the last—particularly Tommy Triller, the main draw for the weekend, with an ego to match his bank account. Tensions run high, but Milan thinks they have things covered . . . until Triller’s dead body is found in his hotel room, a bullet hole between his eyes and a motivational CD jammed in his mouth.

Among the suspects are fellow speakers, including southern psychologist Dr. Ben, who resented earning less than Triller; hip hop artist and convicted killer Hy Jinx; and former big-league baseball manager Tony Nardoianni, who might be willing to do almost anything for the right price.

Milan figures he and K.O. are out of work when his significant other, Cleveland homicide detective Tobe Blaine, takes charge of the murder case. But to Milan’s surprise, his old nemesis and local mob boss Victor Gaimari asks Milan to work for him. Nardoianni owes Victor, who wants to make sure the debt is paid—and that the aging athlete’s gambling past stays under wraps as the murder investigation continues.

Tobe’s not happy to have Milan and K.O. operating on her turf. But a job is a job, and Milan is determined to clear his new client of murder . . . by finding the real killer. 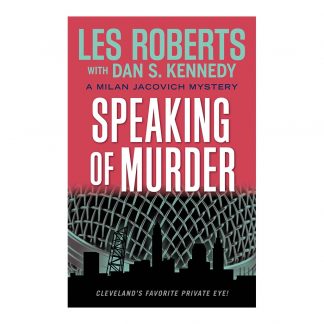