And Other Tales of Cleveland Woe

The foulest crimes and worst disasters in Cleveland history are recounted in 15 incredible-but-true tales. Delves into the city’s most notorious moments, from the 1916 waterworks collapse to the Cleveland Clinic fire to the sensational Sam Sheppard murder trial. These gripping narratives deliver high drama and dark comedy, heroes and villains.

“A rollicking, no-holds-barred account of the facts (and continued speculation) about some of the darkest events and weirdest people in Cleveland’s history.” — Youngstown Vindicator

The foulest crimes and worst disasters in Cleveland history are recounted in these 15 incredible-but-true tales, including:

• A no-holds-barred account of the infamous and sensational Sam Sheppard murder trial;

• The chilling 1919 Dan Kaber murder, in which three generations of Lakewood women—mother, daughter, and grandmother—conspired to dispose of an inoffensive husband with arsenic and knife-wielding hired killers;

• Cleveland Electric Railway Car 642’s horrifying plunge off the Central Viaduct into the Cuyahoga River in the Flats;

• The weird tale of industrialist Joe Gogan’s trial for murdering his wife—by hitting her in the face with a bag of rat poison;

7. “Five Minutes Out of Nowhere” (The 1932 Ellington Apartments Inferno) 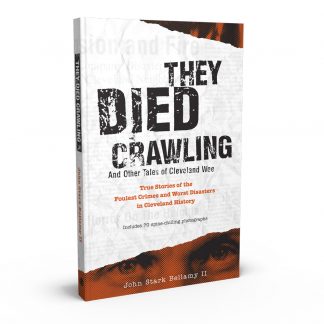