Veteran sports writer Terry Pluto asks Cleveland Browns fans: Why, after four decades of heartbreak, teasing, and futility, do you still stick with this team? Their stories, coupled with Pluto’s own insight and analysis, deliver the answers. Like any intense relationship, it’s complicated. But these fans just won’t give up.

“For dedicated Browns fans [the book is] like leafing through an old family photo album.” — BlogCritics.com

Here’s a question for any Browns fan: Why?

Why, more than four long decades after your team’s last championship . . . despite a relentless pattern of heartbreak, teasing, and more heartbreak . . . capped with a decade of utter futility . . . do you still stick with the Cleveland Browns?

Veteran sportswriter Terry Pluto gets a daily barrage of email from fans letting their hearts bleed out orange and brown. So he decided to ask his readers: Just what is it about this team that makes you love them, hate them, and still keep coming back for more?

A thousand fans responded—in detail. Their stories—along with interviews with former players and Pluto’s own expert analysis—deliver the answer. Answers, actually. Because like any intense relationship, it’s a little complicated . . .

Covering the Browns from 1964 through present day, this book does for Cleveland football what Pluto’s classic about the Indians, The Curse of Rocky Colavito, did for Cleveland baseball: It won’t make the pain go away, but it might help you remember why it’s worth enduring.

1. Being a Browns fan is completely, utterly irrational. But you already know that

2. The Fumble didn’t cost the Browns a chance to go to the Super Bowl

3. The Browns do have a rivalry with the Steelers, but not the kind you think

Voices of the Fans: How I Fell in Love with the Browns

4. Fans know the draft is important, which is why it often makes them scream

5. Brian Sipe is still young in the hearts of most Browns fans

6. The greatest Brown ever is a Brown, but his first name is not Jim

Voices of the Fans: The Browns Are Family

8. The Drive didn’t beat the Browns. It hurt. It drove fans to tears. It was almost inexcusable. But it isn’t why the Browns lost to Denver

Voices of the Fans: Browns Fans in Exile

10. Clay Matthews made the fans proud

Voices of the Fans: Why We Love Bernie Kosar

12. Only the players and the fans could have created the Dawg Pound

13. Art Modell is just not a Hall-of-Famer

14. Old Municipal Stadium may have been a dump, but it was our dump

Voices of the Fans: Fan Favorites

17. Loving the Browns doesn’t make sense. But we just can’t help ourselves 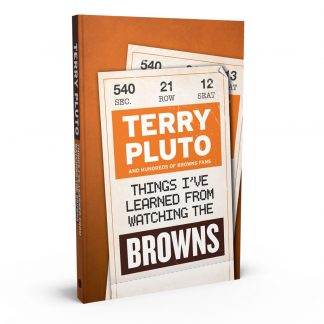 You're viewing: Things I’ve Learned from Watching the Browns $15.95
Add to cart