The dramatic original account of events that shook the nation. On May 4, 1970, National Guard bullets killed four students, wounded nine, and transformed Kent State University into a national nightmare. Two prize-winning reporters interviewed all the participants in the tragedy and established for the first time what actually took place that day.

The dramatic original account of events that shook the nation.

At noon on May 4, 1970, a thirteen-second burst of gunfire transformed the campus of Kent State University into a national nightmare. National Guard bullets killed four students and wounded nine. By nightfall the campus was evacuated and the school was closed. A generation of college students said they had lost all hope for the System and the future.

How did it happen that young Americans in battle helmets, gas masks, and combat boots confronted other young Americans wearing bell-bottom trousers, flowered shirts, and shoulder-length hair? What were the issues and why did the confrontation escalate so terribly? Would there be future confrontations like the one of May 4?

To answer these questions, prize-winning reporters Eszterhas and Roberts, who were on campus on May 4, spent weeks interviewing all the participants in the tragedy. They traveled to victims’ homes and talked to relatives and friends; they spoke to National Guardsmen on the firing line and to students who were fired on. By putting together hundreds of first-person accounts they were able to establish for the first time what actually took place on the day of the shooting.

What Will Happen Now? 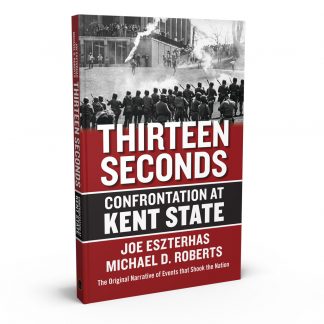