Like a classic throwback jersey, this book recalls favorite players and moments from Cleveland Browns teams of the 1970s, ’80s, ’90s and more. Visit with Bernie Kosar, Ozzie Newsome, Brian Sipe, Marty Schottenheimer, Doug Dieken, Greg Pruitt, Kevin Mack, Bill Belichik and others from days when the “Kardiac Kids” and the “Dawgs” ruled the old Stadium.

If you remember the Kardiac Kids … the Dawgs … the old Stadium … Bernie and Marty and Ozzie … this book is for you!

Like a Classic throwback jersey, it recalls favorite players and exciting moments from Cleveland Browns teams of the 1970s, 1980s, 1990s and more.

They played it old-school.

Doug Dieken set the NFL record for consecutive starts by a left tackle despite three knee surgeries, broken hands and thumbs, torn tendons, a broken arm and “a concussion or two. Maybe four or six. Hard to know.”

Ozzie Newsome never expected to play tight end when he was drafted, then practically reinvented the position on his way to the Hall of Fame.

Bernie Kosar carried a massive weight on his young shoulders as a hometown hero leading the Browns during years when the team offered a ray of hope to a downtrodden city. Earnest Byner and Kevin Mack together formed one powerhouse backfield and separately dealt admirably with adversity.

Phil Dawson discovered that despite popularity and longevity, “Every kick could be your last.”

These insightful short profiles will entertain Browns fans of any vintage! 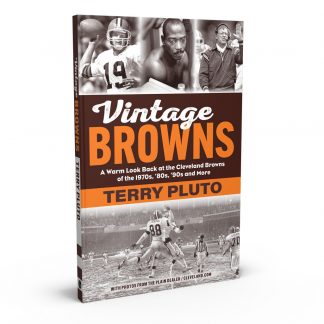