Whatever Happened to Super Joe?

Catch up with 45 former Cleveland Indians players who earned a spot in fans’ hearts, if not the Hall of Fame. Find out what they think now about their playing days and life after baseball. Humorous and insightful, their stories recall an age before multi-million dollar superstars, when the players were in it for the love of the game.

From the mid-1950s through the mid-1990s, the Cleveland Indians fielded teams that just couldn’t win. Yet each lousy team in those “bad old days” had its share of good guys, likeable and colorful young men who earned a spot in fans’ hearts, if not the Hall of Fame.

Guys like “Super Joe” Charboneau, whose Rookie of the Year season inspired a nickname, a book, and a theme song, but whose career flamed out fast. Or Gomer Hodge, the former farm boy who went 4-for-4 in his first plate appearances with the Tribe and proudly announced that he had a 4.000 batting average. Veteran sportswriter Russell Schneider caught up with 45 former Indians players who played in Cleveland during the “bad old days” and found out what they think now about their playing days and their lives after baseball.

Good-fielding shortstop Duane Kuiper was satisfied hitting just one home run in eight seasons because, he said, “Any more than that and people start expecting them.” Former knuckleball pitcher Tom Candiotti never pitched a no-hitter but did throw a perfect game—as a pro bowler. “Immortal” Joe Azcue tried hard to live up to his early nickname but his batting average proved him merely human. And shortstop Frank Duffy considered the Indians of the mid-’70s “just like a happy family” compared to what he found when he was traded to the Boston Red Sox.

Sometimes nostalgic, sometimes tinged with disappointment, often humorous and insightful, their stories will take Tribe fans back to an age before multi-million dollar superstars, when the players were in it for the love of the game. 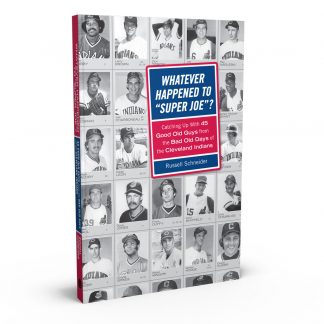 You're viewing: Whatever Happened to Super Joe? $14.95
Add to cart