True Tales of Cleveland’s Most Ferocious Female Killers: An Anthology

Now in paperback! A book for women with a wicked side! Why are women who murder so much more fascinating than their male counterparts? For evidence of that tantalizing truth, dip into this strange-but-true anthology by Cleveland’s top historical crime writer. These 16 tales of willful women and their woeful misdeeds make for awfully entertaining reading.

Women who murder . . . why are they so much more fascinating than their male counterparts? For evidence, dip into any of the sixteen strange-but-true tales collected in this anthology by Cleveland’s leading historical crime writer. You’ll meet:

• Ill-fated Catherine Manz, the “Bad Cinderella” who poisoned her step-sister in revenge for years of mistreatment, then made her getaway wearing her victim’s most fetching outfit, a red dress and an enormous feathered hat . . .

• Velma West, the big-city girl who scandalized rural Lake County in the 1920s with her “unnatural passions”—and ended her marriage-made-in-hell with a swift hammer’s blow to the skull of her dull husband, Eddie . . .

• Eva Kaber, “Lakewood’s Lady Borgia,” who, along with her mother and daughter, conspired to dispose of an inconvenient husband with arsenic and knife-wielding hired killers . . .

• Martha Wise, Medina’s not-so-merry widow, who poisoned a dozen relatives—including her husband, mother, and brother—because she enjoyed going to funerals . . .

And a cast of other, equally fascinating women who behaved very, very badly. This is wickedly entertaining reading!

She Got Her Money’s Worth (Eva Kaber, Lakewood’s Lady Borgia)

“Step aside, Daddy, and I’ll fill him full of lead!” (The Insouciant Mabel Champion)

“This is my last day!” (The Strange Death of Minnie Peters)

The Phantom Flapper Killer (The Mystery of Margaret Heldman)

A Most Unquiet Grave (The Sarah Victor Scandal)

Seduced and Abandoned (Jennie Droz, a Girl of the Cleveland Streets)

“Straighten Them Out” (The Horrific Deeds of Mary Barger )

The Sins of the Father (The Neumeister Family Tragedy)

A Second Shot at Life (The Gothic Tale of Eula Dortch) 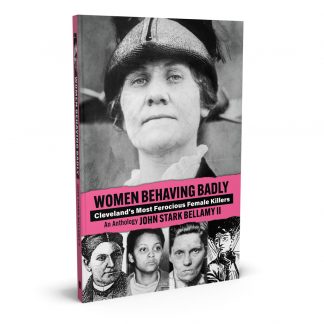