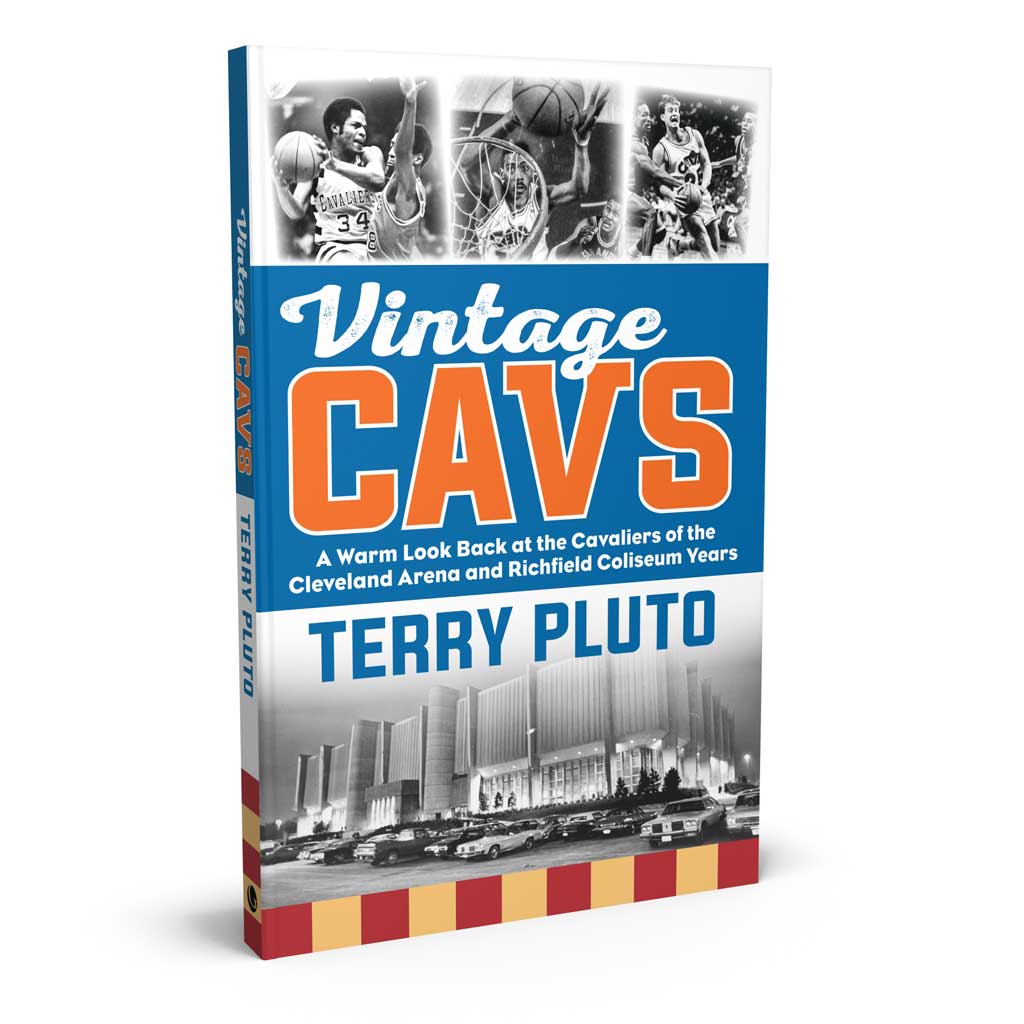 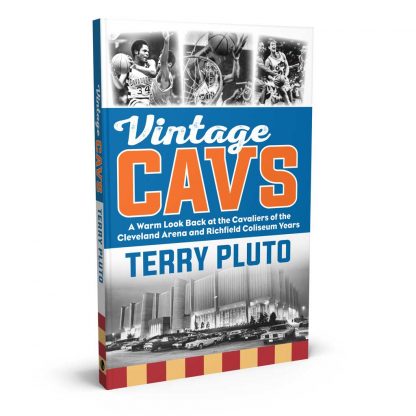 From Vintage Cavs, by Terry Pluto

Remote in hand, I was clicking across the channels when I saw . . . me, on TV.

It was me, back when I was too dumb to know no matter how long you grow hair on the side of your head, you’re still bald on top. It appeared I was auditioning for a Ben Franklin look-alike contest.

Yikes! That was embarrassing.

But there I was covering a Cavaliers game when the NBA was a different place. It was when the Cavalier beat writers were assigned to sit at the scorers’ table, right next to the Cleveland bench.

This was a Cavaliers/Chicago Bulls game from March 25, 1988, being broadcast as part of the NBA TV channel’s “Hardwood Classics” series.

This was not Michael Jordan’s “Shot” in Game 5 of the 1989 playoffs. It wasn’t a playoff game at all. It was just a March night in the NBA from decades ago at my favorite place to watch a game . . .

As I tuned into the game, the camera zoomed into the Cavaliers huddle. Coach Lenny Wilkens was drawing up a play. I saw my bald head staring into the huddle, watching Wilkens scribbling his Xs and Os on a white board.

The Cavs came out of the huddle onto the court . . .

That was the Cavs starting lineup that night. I found the game as the second half began. The Cavs were losing.

The television coverage featured the Chicago Bulls broadcasters, Jimmy Durham and Johnny Kerr. They kept talking about how Cleveland and the Bulls “were the NBA’s teams of the future.” They praised general manager Wayne Embry for putting together the Cavs roster. They talked about Lenny Wilkens being the right coach for this young team.

The Bulls were coached by Doug Collins. They praised him as the ideal coach for Jordan. It took a couple of minutes for me to realize the tall guy next to Collins was Phil Jackson, an assistant coach. Jackson was clean-shaven, imported from the Albany Patroons of the minor league Continental Basketball Association (CBA) by Bulls general manager Jerry Krause. Jackson was there to help Collins. He also was Krause’s choice to take over for Collins if the Bulls didn’t progress as the general manager expected.

That would happen a year later.

This game was so long ago and the Bulls were so young, future stars Scottie Pippen and Horace Grant were coming off the bench.

They had John Williams, Craig Ehlo and Dell Curry coming off their bench.

These were two good teams who indeed would be battling it out in the playoffs for several years.

As I write this, I can close my eyes and not only see the Coliseum, I can feel it shaking . . .

The Coliseum had a nice overhead scoreboard, not a Humungotron like the monstrosity that hovers over the court at Cleveland’s Rocket Mortgage FieldHouse today. This was before the Internet, cellphones and the obsession with e-sports and video games. The scoreboard supplied basic information, and maybe a few commercial messages.

The fans were there to be entertained by the game, to feel the energy from the court and their cheers from the seats. It also helped that the “luxury boxes” at the old Coliseum were up near the ceiling. That allowed “regular fans” to sit much closer to the court—where they could be heard. In 1988, fans didn’t have to take out a second mortgage to be near the floor. Prime seats in the lower bowl went for $18 each.

Here is the disclaimer: Every sports fan has a sense of nostalgia for the era when they fell in love with their favorite team.

That’s what this team represented to the Cavalier fans.

Watching the game that was played more than 30 years ago, I kept thinking, “Everyone looks so young!”

Neither team had a clue what was coming. At this point, the NBA was ruled by the Los Angeles Lakers, the Boston Celtics and the emerging Detroit Pistons.

The Bulls were trying to build a roster around Jordan.

The Cavs were trying to construct a team with no superstar, but a group of high-character, unselfish and very talented players.

Six-foot Mark Price looked like he was a senior in high school, not a 24-year-old in his second pro season. I watched him dribble the ball up the court. As he reached the top of the key, Brad Daugherty came from under the basket to set a pick.

The 7-foot Daugherty was only 22 years old and had the face of a high school sophomore.

As Daugherty set a pick on Price’s man (Chicago’s Sam Vincent), Price took a dribble, then stopped at the foul line. For a brief second, it appeared Price would take a jumper.

But Daugherty was lumbering to the rim. His man (Chicago’s Dave Corzine) had stopped to stare at Price. And Daugherty was wide open. Price delivered a perfect pass.

Chicago broadcaster Johnny Kerr was a former NBA center. He raved about Daugherty’s ability to set picks, catch passes on the move and score with fluid grace near the rim.

That was the Cavs in their second season under Wilkens.

The ball moved from side-to-side of the court. Players created “spacing,” meaning they were not standing in the same area.

The passing was crisp, often leading to open shots . . .

It was basketball the way it was supposed to be played—or at least, the way those of us of a certain age thought it should be played.

Daugherty would set his 260-pound frame near the basket in the low post. And the Cavs knew how to pass him the ball in that spot.

Because Wilkens had his players do it over and over again in practice. He showed them the proper angles to pass to a big man close to the rim. He showed the big man how to position his body to keep his defender on his back and create an excellent target for the passer.

How do I know this?

Because this was an era when the media was allowed to watch practice.

As Danny Ferry told me, “Lenny had a beautiful offense.”

It was refreshing to see teams not obsessed with the 3-point shot. They believed an open 15-footer was a good shot. Today’s analytics insist a 25-footer for three points is better than a 15-footer for two points. The best modern offenses are supposed to feature 3-point shots or drives to the rim resulting in layups and/or dunks.

Wilkens wanted his team to take smart, uncontested shots within a reasonable distance of the basket.

In this game, the Bulls were 2-of-3 on 3-pointers. Wilkens liked the wide open 3-pointer for certain players. The Cavs were 3-for-8.

Chicago’s offense was often stagnant. The Bulls often allowed Jordan to take the ball at the top of the key and create his own shot while the other four players watched. At times, Jordan would dribble and dribble and dribble, often drawing a double-team on defense. With the 24-second clock ticking down, he’d fire a pass to John Paxson or Oakley for an open jumper.

This isolation offense would eventually lead to Collins being fired and replaced by Jackson, who installed a “triangle” offense. It was different from what Wilkens employed, but it created the same ball and player movement.

Watching Jordan against the Cavs in the late 1980s—and the contrasting offenses—led Krause to make the coaching change. The general manager believed his team would never win a title with the “All Michael, All The Time” offense. And he didn’t trust Collins to make the changes he wanted.

I covered the game, but have no memory of it.

I still don’t know why NBA TV featured it 31 years later. It had no significance in the standings. Jordan finished with 39 points. That’s a lot. But not 50 or even 60 points as he sometimes scored against the Cavs. In that 1987–88 season, Jordan averaged 35 points.

The Bulls won, 111-110, in overtime. But there was no buzzer-beating shot by Jordan.

The Cavs had an impressive shot-blocking defense. In one sequence, John Williams swatted away a Jordan layup. Oakley grabbed the ball, tried his own layup—and Williams blocked that, too. He had four blocks in that game.

Nance scored 29 points and had 11 rebounds and six blocks. He played so cool and with so much poise.

But the Cavs were crushed on the boards, 60-33. Chicago often dominated the rebounding when facing the Cavs. Part of it was Nance and Williams leaving their men to try to block shots, especially on Jordan. That created open lanes to the rim for the Bulls’ big men to grab offensive rebounds.

Looking back, it was a fascinating game in terms of what was to happen in the next few years.

Here were the four Cleveland guards who played in that game: Ron Harper, Craig Ehlo, Mark Price and Dell Curry.

Curry is the most interesting of the group because it’s easy to forget the Cavs once had him. In 1986–87, Curry was a rookie who played little for Utah. In training camp, the Cavs traded Mel Turpin to Utah for Kent Benson and the 6-foot-4 Curry.

Embry loved Curry for his outside shooting. In his one season with the Cavs, Curry averaged 10 points per game in 19 minutes. He shot 46 percent from the field coming off the bench.

When that season ended, Charlotte was entering the NBA as an expansion team. Each established team was allowed to protect eight players.

The Cavs’ final decision for the list came down to Curry or small forward Mike Sanders.

In this March 25 game against the Bulls, Curry came off the bench sizzling, scoring 24 points on 10-of-20 shooting. Sanders played eight scoreless minutes.

By the end of the season, Sanders was playing a lot as a small forward whose main job was defense. Sanders was 27 and it was clear he was a hustling player with limited physical ability. There always are a number of players like Sanders floating around the NBA in any given season.

But there are few who shot the ball as well as Curry, now or in the late 1980s. Curry also was only in his second NBA season.

I recall a conversation with Embry when I said, “I assume you are protecting Curry.”

There was a long silence.

“Wayne, Charlotte is not going to take Sanders. You have to know that. But if you leave Curry exposed, any expansion team would take him.”

Embry didn’t want to discuss it.

Sanders was protected. Curry went to Charlotte. Curry played 16 NBA seasons, averaging 11.7 points. As the 3-point shot became more popular, his value increased. He shot 40 percent behind the arc. His son, Stephen Curry, has become one of the greatest 3-point shooters in history. Stephen Curry was born in an Akron hospital during the one season his father spent playing for the Cavs.

A little over a year later, the Cavs traded Harper to the L.A. Clippers.

The Cavs went from a tall, talented group of shooting guards (Ehlo, Harper and Curry) all in the 6-4 to 6-6 range to only Ehlo less than two seasons later.

No one knew Curry and Harper would soon be gone.

No one knew the Cavs would face Jordan five times in the playoffs . . . and never win a series.

No one knew Chicago was destined to be great, while the Cavs and their fans would be frustrated with simply being good.

But this much I did know back then—and still do when thinking about the game more than three decades later.

That was a special time in Cavs history.

From the book Vintage Cavs, © Terry Pluto. All rights reserved.