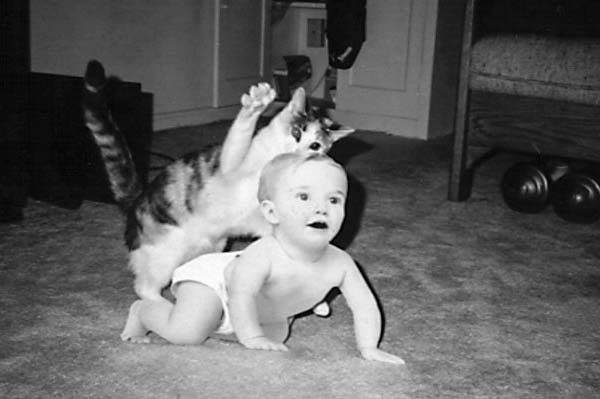 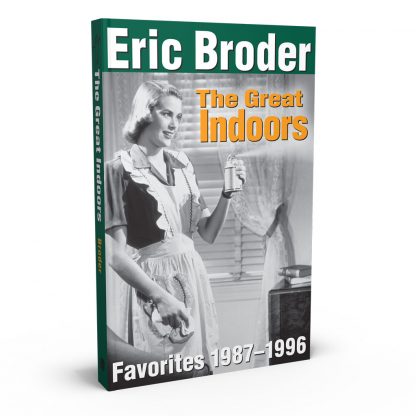 From The Great Indoors by Eric Broder

I suppose you think that because this column is called “The Great Indoors” its author never goes outside. Just a couch potato who watches TV and eats Smokehouse almonds all night. A shlub who shuffles around the apartment giving himself carpet shocks. A guy to whom nothing happens.

Most of that is right. I do give myself shocks because I don’t pick up my feet when I walk. I’m trying to conquer this. I do watch a lot of TV, but that’s my job. I cover the waterfront. I admit I lie around on my can quite a bit. However, lots of things happen to me—amazing and exciting things. And they happen indoors.

I’d like to begin with my most exciting indoor incident. It involves Irma La Douce and a roach.

My friend Barbara and I went to the video store one summer evening last year and rented two movies on videodisc, Irma La Douce and A Thousand Clowns. We watched A Thousand Clowns, and enjoyed it very much. It was funny and heartwarming. Thought-provoking, too. It was dynamite entertainment, and I recommend it without reservation.

Anyway, we finished watching that and put on Irma La Douce. This movie was directed by Billy Wilder, one of my favorites. It wasn’t very good, but it was a handsome production, set in Paris and starring Jack Lemmon and Shirley MacLaine.

I should mention at this juncture that it was brutally hot and humid that night, and I was just wearing shorts. Total vulnerability! Naked human flesh that any vermin would be delighted to chew on! This is important to the story.

So we are watching this movie and having a fine time when we hear a small scuffling sound come from around the TV. We’re not children. We know this is a bug or a rat. In this kind of weather you expect them. But you don’t like them around, that’s for sure.

I instructed our cat, Vince, to flush the animal out and kill it, but she was not interested and went away. I tiptoed over to the TV and peered behind it. There it was: a roach, a good-sized one. I could say it looked up at me and spit, but that would be embellishing an already exciting story.

I clapped my fingers against my palm like a schoolteacher to frighten it out into the open. That didn’t work. I stomped my foot. The roach only moved his leg a little. At that point I decided to sit back down and just wait and enjoy the rest of Irma La Douce.

We didn’t have to wait long. The movie was almost over when the roach came out. We expected him to run off to the side of the room somewhere and disappear. But he didn’t. He came charging at us like L.A. Raider defensive lineman Howie Long! I can still hear him galloping across the room: pittapittapittapitta. I’d like to say I met him head on, but I squealed and bounded up onto the couch. Barbara moved fast but didn’t scream like I did. The roach went under the couch.

We determined that this roach had to go or we’d be hostages to fear. I lifted the couch and there he was, going to the lavatory. Barbara put a plastic cup down on top of him. Caught! But now the hard part. Sliding the top of the container under the bug. I told Barbara that I would do this, since it was my home and thus my bug. She held the couch up, and I carefully started sliding the lid under the roach’s legs.

I got him, and carried the cup to the incinerator in the apartment building’s back hall. I tried to throw the roach down the incinerator, but he flew back at me and landed with a thud near my feet. I jumped around a little, then raced back into the apartment, locking him out. It was a narrow escape.

That was the roach story. This next one is a little less heroic, but again proves there is as much danger indoors as there is out.

Several years ago, I was to take a car trip up to Northern Michigan. The night before I left, I foolishly drank to excess. I woke up early, and felt keen pain all over my body—and was not at my best mentally, either.

In my little second-floor apartment I had a Carry-Cool air conditioner balanced in the window, held down by the sash. I knew I had to bring the unit in because I would be gone three weeks.

I staggered over to the window and just lifted the sash. Instantly I knew I had made a mistake. I forgot to hold on to the air conditioner.

How can I possibly convey the thrill I felt at that moment, when I knew my air conditioner was falling out of my second-story window? I was conscious of the sound it was making: whizzzzzzz. And then crash, of course. It was an exciting few seconds in my life; perhaps the most exciting. I really knew I was alive. Though at that particular time I did wish I was dead.

I looked out of the window, and down. There was the air conditioner, all right, lying on the concrete driveway. It was broken. It looked like a cartoon burlesque of a broken thing, springs coming out of it, nuts and bolts scattered. It looked like that then, anyway. I rushed outside, gathered it up, and put it by the trash.

That was it for the air conditioner.

These are just a few stories from the indoor world of adventure. I could think of plenty more, like when the Great Blizzard of ’78 shattered my storm window when I had the flu. But I think I’ve made my point.

From the book The Great Indoors, © Eric Broder. All rights reserved.