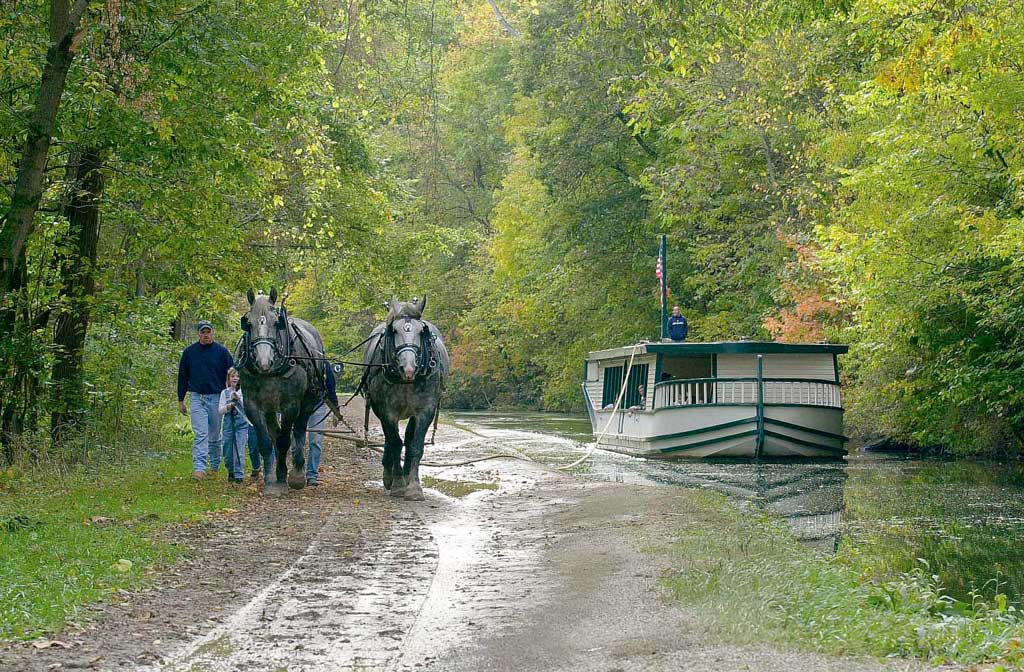 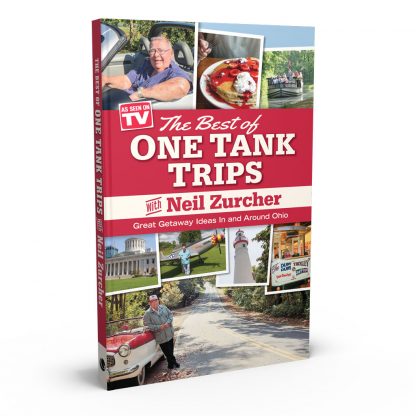 From The Best of One Tank Trips, by Neil Zurcher

Often, when I am on a One Tank Trip and tied up in a traffic jam on an interstate highway, I daydream about what it must have been like traveling in Ohio in the past, when we didn’t have limited-access highways. When life was much slower and simpler.

Long before there were interstate highways crisscrossing the Buckeye State, there were, among others, the Lincoln Highway, the National Road and U.S. Route 20.

But long ago, when Ohio first became a state at the start of the nineteenth century, much of the land was still wilderness, with only a few primitive roads. The only trails were paths once trodden by Native Americans and bison, many of them narrow, dangerous and nearly impassable to wagons.

It was in that time that our pioneer ancestors came up with a unique idea: a series of ditches, or canals that would provide a water highway from Lake Erie on the north to the Ohio River on the south.

A series of locks were also built to move the canals up and over hills. Viaducts were constructed to allow the ditch to pass over rivers and streams. Reservoirs and lakes were created along the way to supply the canals with water.

The big ditch opened Ohio to the prosperous eastern markets and allowed farmers and factories in the new state to sell their products in a much wider marketplace. Now they could send and receive goods from ports on both the Ohio River and Lake Erie. Canal boats loaded with all kinds of freight moved up and down the state around the clock.

It was slow, only as fast as a man and horse or mule could walk, towing the big boats from towpaths along the edge of the canals. The journey was slowed even more by laborious maneuvering through the numerous locks along the way.

Many immigrants were on board these canal boats heading to new homes in Ohio. It was such a success that by 1855, the canal system in Ohio stretched for more than 1,000 miles of main line canals, locks, feeder canals and lakes. The streams passed through 44 of Ohio’s 88 counties, making this mode of transportation available to nearly every resident of the state. It became a business that surprisingly lasted into the twentieth century.

There were eventually two major canal systems in Ohio. One, the Ohio and Erie Canal, which started near the mouth of the Cuyahoga River in Cleveland, trekked south through Akron, Coshocton, Newark and Chillicothe, and finally ended at the Ohio River in Portsmouth. The other was the Miami and Erie Canal, which also started at Lake Erie in Toledo and ran down the western side of the Buckeye State through Maumee, Grand Rapids, St. Marys, Piqua, Dayton, and finally, Cincinnati, where it, too, merged into the Ohio River.

But in the late nineteenth century, railroads had begun edging into and across Ohio. This quicker, more accessible means of transportation soon cut into the popularity of the much slower canal system and began choking-off the canal freight business so that by the dawn of the twentieth century, canal operators were making more money selling canal water to businesses and towns that sprang up along their routes than they were making by hauling freight.

The end of the canal era came in 1913 when, after a severe winter with heavy snow, Ohio was hit by a March rainstorm that caused heavy flooding over much of the state. Reservoirs flooded, spilling into canals, smashing out locks, and washing away the banks of the canals. The damage was so devastating that the canals never recovered.

After the floods, much of the damaged canals became weed-choked ditches and were eventually sold off to private individuals or, in some cases, the lands were transferred to other state agencies and used for recreation or made into roads.

Today many communities across the state have restored sections of the old canals as tourist attractions. One of the longest stretches of a water-filled part of the Ohio and Erie Canal runs through the Cuyahoga Valley National Park, which has a visitors center that explains how the canals worked, and you can walk along the actual towpath.

There are four places in Ohio where you can still ride on an authentic canal boat.

In Canal Fulton, south of Akron, from May until late September you can take a replica of a canal boat along a one-mile stretch of the old canal. The St. Helena III is a 60-passenger boat based on the freighters that once sailed this canal. The horse-drawn ride takes about an hour for a cruise to Lock IV, where it turns around and comes back to Heritage Park where the ride begins.

One of the best places in Ohio to see what canal life was really like is to visit Roscoe Village, a restored canal town on the outskirts of Coshocton, Ohio. Here, businesses that were spawned by the canal or were representative of the canal era still operate with guides in costumes of the time. One of the first re-created canal boats in the state, the Monticello III, offers visitors a narrated ride over a mile-and-a-half of the old canal into a turning basin before returning to the park at the edge of town.

In Northwest Ohio, Metroparks Toledo does a good job of demonstrating life on the canals with a ride on their replica canal boat at Providence Park. It’s one of the few places in the state where you can go through a working hand-operated lock that raises and lowers the boat. There is also a water-powered grist mill that is part of the park.

In Southwest Ohio, the Ohio Historical Society operates the Johnston Farm, a 200-acre park that also includes a portion of the Miami-Erie Canal. Here a 70-foot-long replica of an early canal boat, the General Harrison, offers rides to visitors during the summer months.

It’s a journey into Ohio’s past, and it’s just a One Tank Trip.

From the book The Best of One Tank Trips, © Neil Zurcher. All rights reserved.