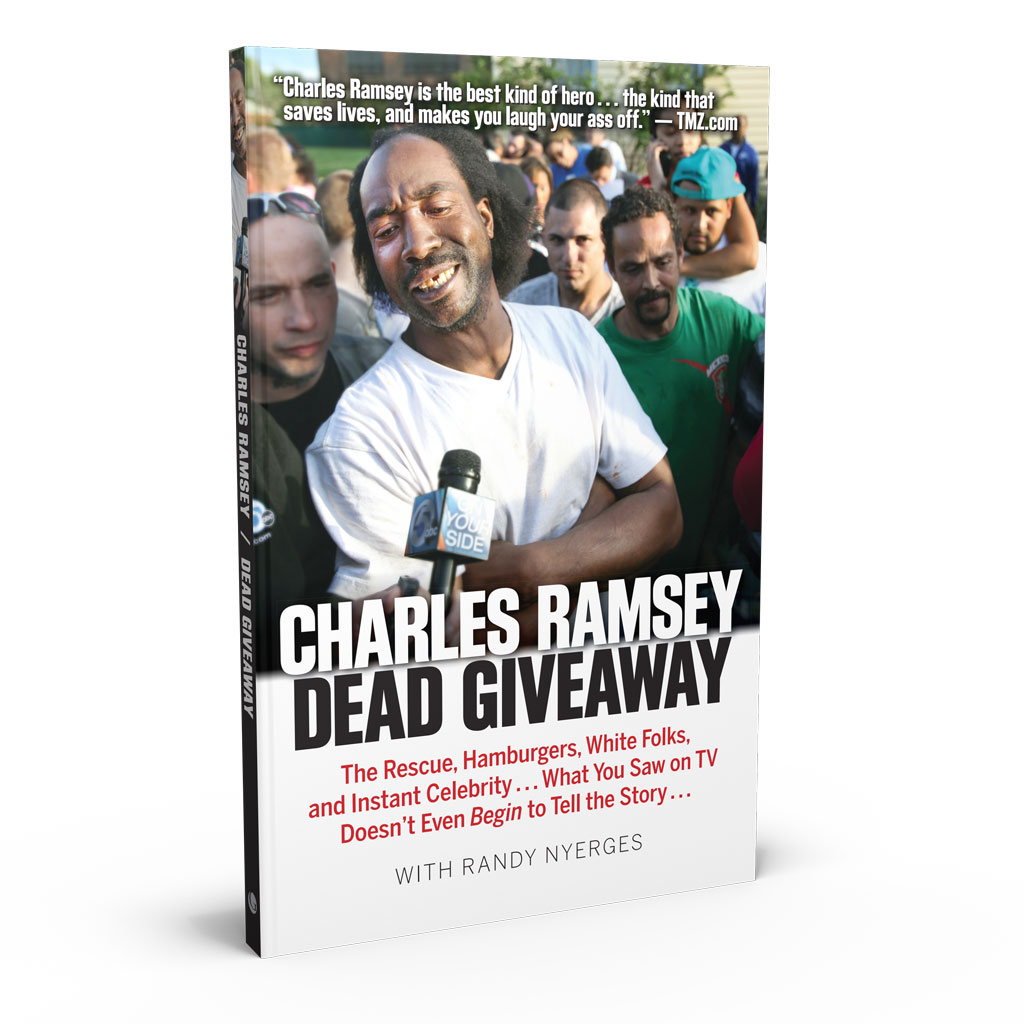 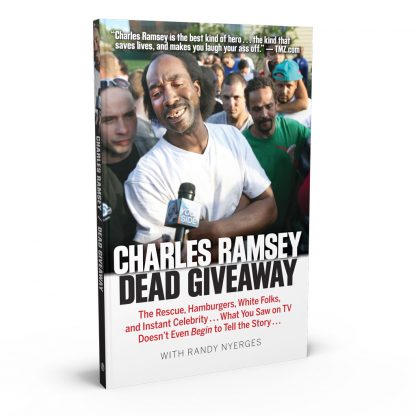 From Dead Giveaway, by Charles Ramsey with Randy Nyerges

[This excerpt begins in the late afternoon on Monday, May 6, 2013, after Charles Ramsey left his local McDonald’s at West 32nd Street and Clark Avenue and headed to his home at 2203 Seymour Avenue, next door to Ariel Castro.]

I rolled up on my house and parked my bike on my porch. I went in the house, took a seat on my couch, and took a bite into that juicy Big Mac. Life was tough, but it was good.

And then something happened that would change the lives of so many people in so many ways . . .

Sitting there, burger in hand, I heard a sudden banging from next door. At first I didn’t know what to make of it, and I wanted my sandwich. But the banging continued. It got louder. Then I heard a woman’s scream—the blood-curdling scream that you would hear if a kid got run over by a car.

Children playing on the street froze. Then more cries for help. I thought I’d seen Ariel go off to work, so I had not a clue as to what was going on. I looked outside and saw this Dominican dude, Angel Cordero, run across the street and onto the sidewalk. Without putting down my sandwich I ran to the sidewalk where Angel was standing.

“Who the fuck is that?” I asked Angel.

I knew that Angel and Ariel didn’t like each other, not for anything specific other than Angel was Dominican and Ariel was Puerto Rican. I guess that made them something like natural enemies within the Hispanic world, I don’t know.

Big Mac still in hand, I ran up to Ariel’s porch while Angel stayed behind. There was this young, attractive white woman, wearing a white tank top, clutching a child, lodged behind the storm door, banging and screaming.

I was stunned. I had believed all this time that Ariel lived alone. I had never seen anyone over there other than him, other than the little girl I thought was his granddaughter. I figured this was some sort of domestic violence thing, a situation I was all too familiar with.

I stood on the porch. “How the hell did you get in there?” I asked this frantic woman. She had squeezed her left arm out from behind the storm door and was in no mood for a conversation.

“Just get me outta here!” she yelled.

I grabbed the storm door handle and yanked. Then I noticed the door was locked shut from the inside. I gave a couple more yanks, but that door wasn’t going to budge. The girl gave the bottom panel a few meager kicks.

So I kicked that bottom panel with everything I had. Nothing. I picked my leg up and kicked it again, beating in the bottom panel of the aluminum door but not all the way. In my mind I knew I better act fast—not because it was time to be a hero, but because I was taking my own life into my hands. What do you think would have happened to me if a neighborhood of Puerto Ricans saw a scary-looking black dude trying to kick down the door of one of their fellow countrymen? I gave it one more size 13 kick and the panel broke inward. The girl crawled out and onto the porch, where I reached down to help her up. She got up, clutched onto me, then turned around and reached back through the busted bottom panel. The child was crying hysterically. The woman then pulled the diapered child through the bashed-in storm door. It was a little girl about six years old. She was screaming in terror.

But I recognized her! It was the little girl I had always believed was Ariel’s granddaughter.

Ariel spent a fair amount of time working on his cars and motorcycles in his backyard. He never cleaned up the oil or antifreeze that leaked all over the place. This little girl played with two oily dogs, a Chihuahua and a small white poodle, in Ariel’s grimy back yard. I had always wondered why I only saw the little girl and never her mother or father.

“Can you shut this kid up?” I said, more annoyed than anything.

“She just wants her daddy,” the girl said.

“Well then call the motherfucker!” I yelled.

“Ariel is her daddy,” she said.

Now I was really confused. Ariel had a kid? And who was this pretty little white girl and how did she get here? Nothing made sense.

The girl turns to me and says, “Call 911. I’m Amanda Berry.” At first, the name didn’t ring a bell. It sounded like she said Linda something. My cell phone was sitting in my living room, so I told her to follow me. We stepped inside my house, and I spotted my phone. I picked it up and handed it to her.

Amanda looked at the phone in bewilderment. Little did I know she had been locked down in there for 10 years. Little did she know how to operate a touch-screen cell phone.

“I don’t know how to work this,” she said, still panicked, her daughter still screaming. I took the phone and punched in the three numbers, putting through a call that would literally be heard around the world. My language was coarse, but in a panic situation like this I didn’t have time to refine my King’s English.

The 911 operator answered, and I let it fly.

“I’m at 2207 Seymour, West 25th. Hey, check this out. I just came from McDonald’s, right? I’m on my porch, eating my li’l food, right? This broad is tryin’ to break out the fuckin’ house next door to me. So, it’s a bunch of people on the street right now and shit, so we like well, what’s wrong? What’s the problem? She like, ‘This motherfucker done kidnapped me and my daughter and we been in this bitch.’ She said her name was Linda Berry or some shit, I don’t know who the fuck that is. I just moved over here, bro.”

“Sir, sir, sir, sir. You have to calm down and slow down,” the dispatcher said. “Is she still in the street?” Sorry to say this, but that operator was a fuckin’ moron. I wasn’t yelling or screaming or talking over him.

I had told Amanda to call 911 herself because I was convinced that the police were going to think I was some screwball crazyass, especially after dealing with that moronic operator.

“Is she black, white, or Hispanic?”

“Uh, she white. But the baby look Hispanic.”

“Okay, what is she wearing?”

“Do you know the address next door? That she said she was in?”

“OK, I thought that was your address.”

“Nah, I’m smarter than that, bro. I’m telling you where the crime was.”

(At this point, the dispatcher asked for my name and phone number. When the Cleveland Police first released the 911 tape, this part was not edited out. Later, after the world had already heard it, most media outlets bleeped that out.)

“And the people she said that did this? Do you know if they still in the house?”

“I don’t have a fuckin’ clue, bro. I’m just standing here with my McDonald’s.”

The dispatcher asked if she needed an ambulance. I asked Amanda, and she said to send everything.

“She in a panic, bro. I think she been kidnapped so, you know, put yourself in her shoes.”

“We’ll send the police out.”

I’m gonna say this here once and only once. There have been several people on the news and on the Internet who said Angel Cordero ran up to the door and kicked it in. Others said this lady Aurora Marti, who lived across the street, ran up to the porch. They’re all mistaken or fuckin’ liars. Their motivation? Hard to say, but I wouldn’t be surprised if some were trying to weasel in on reward money. If anyone has any question, just ask Amanda Berry: Who kicked in your door, the Dominican guy or the black guy? In fact, Cleveland Police detective Andrew Harasimchuk asked Amanda that very question. Here’s what he said later, at Ariel’s sentencing hearing in August:

“She was able to open the main door of the home, then the storm door. The screen door was locked and she couldn’t open it.

“She began banging on the glass and calling for help. At this time a man and a woman from across the street came to Ariel Castro’s yard and while there in the yard, a man from next door also came over and was up on the porch and began telling Amanda to kick out the bottom panel of the door.”

From the book Dead Giveaway, © Charles Ramsey with Randy Nyerges. All rights reserved.