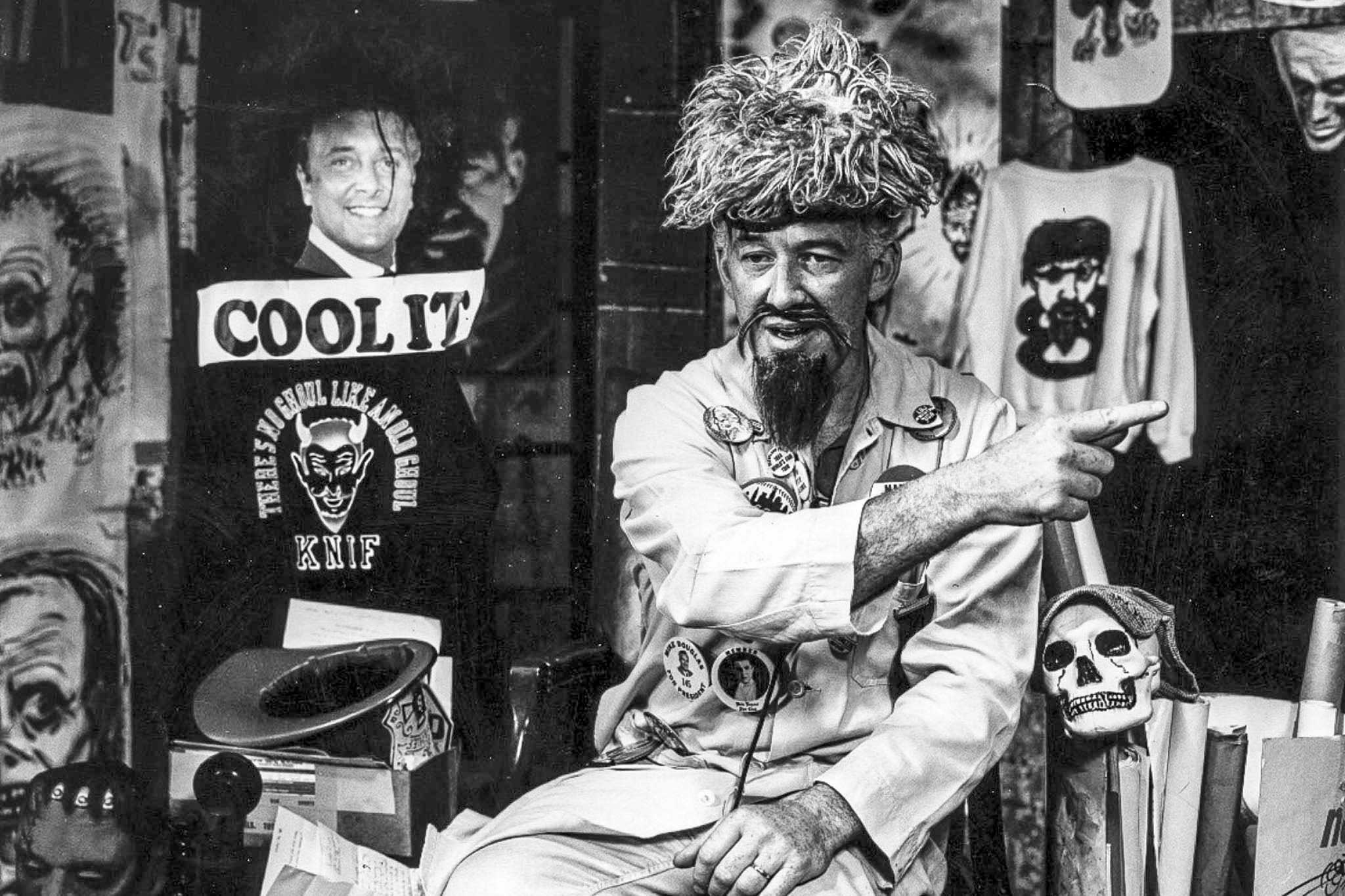 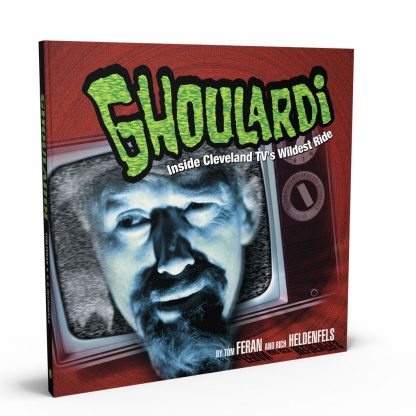 God, thought the thirty-nine-year-old veteran of a checkered career in radio and TV. Comfortable in his staff job, he had lucrative side gigs as an on-camera spokesman for Ohio Bell Telephone and other companies, and he still entertained dreams of being an actor.

He later would say he didn’t mind going on camera because of the performing opportunity and the extra money—about sixty dollars a week to start. Still, he knew that his more prestigious work could dry up if he became too closely associated with the likes of The Leech Woman.

So he put on a fake mustache and beard, adopted a weird voice, and took on an assumed name: Ghoulardi.

Almost instantly the persona became more famous than the man cracking wise behind it. Adults shared his comments at work the following Monday, some shaking their heads in dismay. Newspaper columnists took sides—for and, more often, against him. Kids treated him like God, his face lodged in their minds, his hip lines becoming playground mainstays. Some left reel-to-reel audio tape recorders rolling during his show to capture the moments; they still cherish these precious bits more than thirty years later.

WJW had launched the show as, both literally and figuratively, a shot in the dark, hoping it might draw a bit of attention and a few more viewers at a time when the station ranked third (and last) in local ratings. They created an icon of popular culture whose legacy, decades later, would defy the disposable standards of modern media.

Television was growing, still rough around the edges, into the common thread of community consciousness. Ghoulardi would first conquer it, amassing an audience of a size unimaginable today; and then transcend it, surviving in the memories, attitudes, and language of a generation who would carry him to even wider attention.

In a self-doubting city ever in search of an identity, and in the unsuspecting calm before the storm of Beatlemania, he landed with an impact surpassing that of any other local broadcaster, before or since.

The magic began, in that winter of the century, on Friday nights at 11:20, in the old Channel 8 studios at Playhouse Square on Euclid Avenue.

City Camera news would be winding down and Ernie Anderson would just be cranking up. Most likely, he was at the Seagram Bar, informally known as “the Swamp,” finishing off a Ballantine Ale and a cheeseburger; or at Pierre’s, sipping martinis and playing dominoes with Pat the bartender, watching the clock as well as the game. He usually waited until the last possible moment and then had to hurry to work.

As the Shock Theater logo appeared on TV screens across Northeast Ohio, viewers heard strains of Ghoulardi’s theme song, a Duane Eddy B-side called “Desert Rat.” As the song rang through the hallways of Channel 8, Ernie’s footsteps thundered an accompaniment. He grabbed the gear laid out by his teenage gofer Ron Sweed—a mustache, beard, fright wig, and glasses with only one lens—and transformed himself while still in motion, hitting the door of the studio at a dead run and almost sliding out of range as he zoomed in front of the camera. What’s tonight’s movie? he might wonder, then, Bleep it. Doesn’t matter.

He now perched on a stool, a light at his feet casting eerie shadows on his Ghoulardi face, the omnipresent smoke in hand—a Philip Morris cigarette, sometimes in a holder; occasionally a cigar—and began to speak in a voice combining a hint of Bela Lugosi with liberal doses of hepcat—man, baby, diggin’ and the all-purpose group or groups, as in “Hey, groups, we’re gonna have fun tonight…”

He would not promise a great movie. It was a point of personal pride to assure the audience that the movie was bad, spectacularly so, even when it wasn’t. Whether the feature was The House on Haunted Hill or Attack of the Crab Monsters, a grade-B effort or something tumbling to Z, or not even a movie at all (sometimes old TV shows were substituted), it would be mocked by Ghoulardi.

While hundreds of thousands watched Ghoulardi in Northeast Ohio, the late-night studio audience was much smaller, occasionally including a few teenage fans. Off-camera, Sweed would be helping out (and soaking up information he would use years later, as the Ghoul). Sometimes an old friend of Ernie’s dropped by, like actor Tim Conway, on a return visit from Hollywood, or local acquaintances like Bill “Smoochie” Gordon from WEWS (Channel 5) and KYW radio deejay Jay Lawrence. Jack Riley, another buddy, then on WERE radio, might be on hand—or on the phone from his Lakewood home, trying to satisfy Ernie’s pleas for jokes.

There was a director—Ken Clark the first year, but over time whoever was on shift for the telecast, Ernie later said—and one or two cameramen, who could draw Ghoulardi’s derision. On the air, if there was a foul-up, Ghoulardi snapped “Can’t you take a picture? Dummy!” at the cameraman. It was supposed to be a joke, and off the air, demeaning comments were sometimes lightened by his admission that the technicians, too, were part of the Ghoulardi team. One cameraman, Don Quigley, Ernie delighted in tormenting on air and off, according to Ron Sweed; Ernie would set up Quigley for a small electric shock, or blast him in the face with a squirt gun during the telecast.

The inner circle consisted of three men: Ernie, his sound man and sounding board Chuck Schodowski, and projectionist/editor Bob Soinski. The job of the latter two was to organize the chaos around Ernie, to figure out where to drop joking film clips into the movies—in fact, to find the clips, not to mention the music that would become as familiar to fans as the pictures. They were also involved with the filmed sketches in which Ernie starred (and Chuck sometimes co-starred) and—a high honor from Ernie—the butt of his practical jokes.

As Ghoulardi talked to one camera, a second focused on a nearby table which held a model to be blown up with a firecracker—sometimes a car, an airplane, the new Revell line of Beatles (action figures only because Ernie gleefully sent their parts flying), or an unknown construction of a viewer’s own devising. There was also a cutout of talk-show host Mike Douglas punctured with dart holes, with still more punctures likely. On Fridays, there wasn’t much more visible; the Saturday and weekday shows had a complete, and constantly growing, set.

Besides the night’s movie, another film often waited for telecast: a public appearance by the Ghoulardi All-Stars, the traveling softball-basketball-football team that was Ernie’s pride. The movies of the team playing local schools, community groups, and other celebrity teams were a favorite with audiences as viewers recognized themselves in the crowds at the games.

Ghoulardi’s monologues during and between the movies consisted of rambling jokes about local matters, staccato bursts of catchphrases— “stay sick,” “turn blue,” “purple knif,” “cool it with the boom-booms”—or a shot at his target du jour. That could be the legendary local broadcaster Dorothy Fuldheim from Channel 5, or Cleveland’s mayor, Ralph Locher, a charisma-free placeholder sandwiched between the beloved Anthony Celebrezze and the groundbreaking Carl Stokes. Sometimes the target was closer to home; in one surviving clip of Ghoulardi in action, a flatulent noise off-camera prompted Ernie to say, “Howard Hoffmann is not well”—an allusion to Channel 8’s weatherman.

The show could also bring a new installment of “Parma Place,” the bizarre soap opera that raised mockery of Cleveland’s Poles to a new level, or some other sketch that had caught Ernie’s fancy, like an eighteen-minute parody of Gunsmoke noteworthy mainly for being unconscionably long. (When Schodowski urged Ernie to trim it, Ernie replied that the mind-numbing length was the whole point.) Or he would offer a film of one of his pantomime performances, as a hapless bowler or a man on a progressively disastrous date. Then, antagonizing management once again, Ernie could decide it was a good time to give out an executive’s home telephone number.

With seeming ease, he leapt into the movie, joining a herd of victims at a monster’s feet; placid among the terrified, Ghoulardi raised his hand to ask to go to the bathroom. Just as casually, he slipped in a line—“My favorite game is poker . . . You get a girl and you poke ’er”—meant to make adult viewers choke on their late-night snacks. He got away with that line, by the way, but something was always bound to happen that left his bosses apoplectic; Ernie’s chat with management was a Monday-morning ritual.

The fun lasted a little over an hour and a half. There was less here than memory suggests: the movies usually filled about seventy percent of the time, and there had to be room for commercials. Some of Ghoulardi’s tricks had been done before, by other hosts in other cities. But not, for the most part, in Cleveland. The movies are less prominent in fans’ memories than the Ghoulardi moments forming a seamless loop of pleasure.

Some viewers were shocked. They wanted Ghoulardi stamped out, and they caused weekly trouble for the host and his associates until the day Ernie hung up his lab coat.

Others, though—the viewing majority—loved Ghoulardi. They were kids and adults, black and white, blue-collar workers sitting at home, and night owls in bars who correctly sensed in Ghoulardi a kindred spirit. All thought he was funny, some thought he was hip, in time many considered him profoundly influential. That reaction would baffle Ernie. But not us. Because the story of Ghoulardi is not just about a horror host: it’s about Cleveland in the ’60s, and our deep ties to television, and a man who was able to be himself while hiding behind a costume and an assumed name.

From the book Ghoulardi, © Tom Feran and R. D. Heldenfels. All rights reserved.