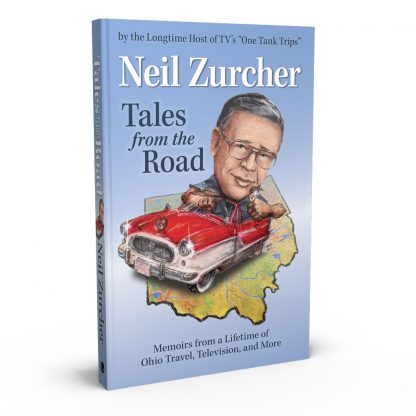 From Tales from the Road, by Neil Zurcher

In 1977, it was announced that His Royal Highness, Charles, the Prince of Wales, would visit Cleveland. Because America had seen the assassinations of John F. Kennedy, Bobby Kennedy, and Martin Luther King, Jr., in the previous decade, security was tightened everywhere, and when any world leader traveled, a reporter was usually assigned to duty we called “the death watch.” The reporter’s job was to be as close to the leader as possible, with a camera ready to go, in case someone made an attempt on the leader’s life. It was a macabre situation but one that governments understood and at least tolerated.

So when it was announced that the heir to the British throne was coming to Cleveland at the invitation of the English Speaking Union, word came from Scotland Yard and the U.S. State Department that only “pool” reporters could travel with the prince throughout the day. One reporter and photographer would represent all the TV stations in town, and others would service newspapers and radio stations.

Several weeks prior to the royal visit, WJW assignment editor Mickey Flanagan told me that it was TV8’s turn to be “pool reporter.” I had been picked with photographers Peter Miller and Lynn Chambers to travel with the prince, once we cleared our respective background security checks.

In addition to staying close to the prince all day, I was expected to share with all the TV stations in town our video and audio recordings, my impressions of the prince, and anything he might have said that we didn’t capture on video. And, oh yes, I needed to be there to record any attempts on his life.

We were gathered on the chosen day in the terminal of Burke Lakefront Airport to await the royal party’s arrival and get last-minute instructions from the Buckingham Palace advance team. We were told that while we would be close to Prince Charles, we were not to speak to His Royal Highness unless he spoke to us first. And we should never, ever attempt to shake hands with him unless he first offered his hand.

I had, of course, seen many pictures of the prince and read many articles about him, but seeing him in person as he stepped off his plane was a different experience. He was a tall, smiling young man, much more handsome than he appeared in photos. He seemed to genuinely enjoy meeting the gaggle of Cleveland officials gathered to welcome him. 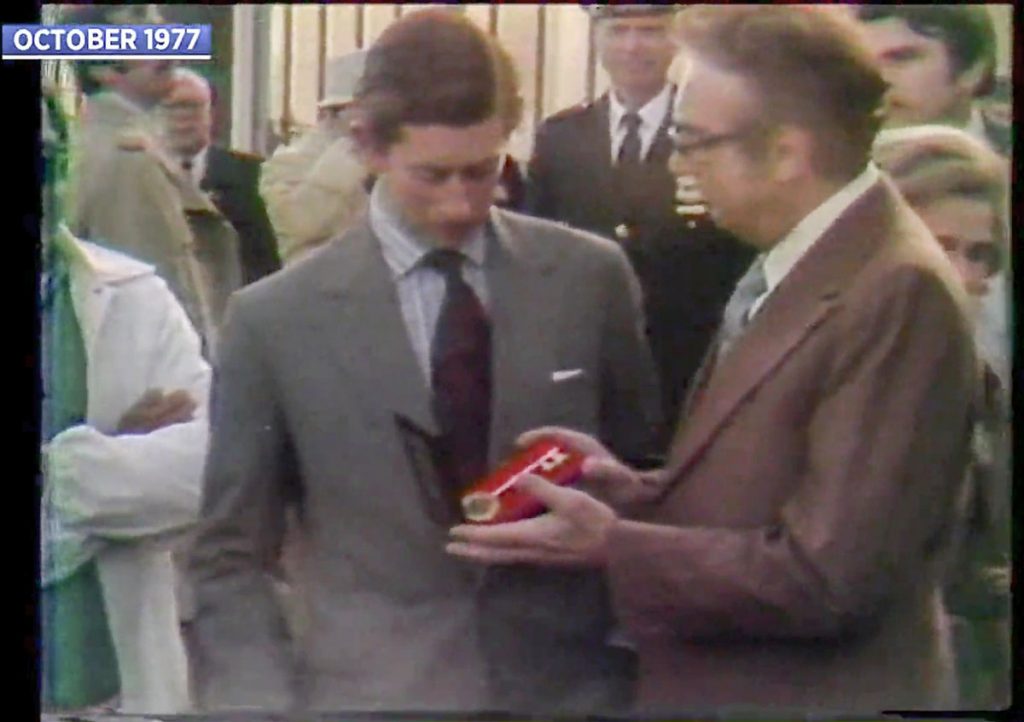 We jumped in our news cruiser to follow the royal limousine and police escort on a whirlwind day of nonstop activities. From a visit to NASA Lewis Research Center to a tree-planting at Public Square, our small band of reporters and photographers was part of the royal party and at the prince’s side. My good friend, legendary UPI photographer Ron Kuntz, was the pool still photographer. Ron wore his trademark beret. Several of us noticed that the prince seemed fascinated by Kuntz’s beret and frequently stared at him.

At Public Square, we joined the rest of the local and national media in town to cover the royal visit. While we may have stood cheek-by-jowl with the prince at private gatherings, here we were just members of the herd of reporters jockeying for position to shout questions or get a picture of him planting his tree. Since the other stations were on hand, plus another camera from WJW-TV, Peter Miller, Lynn Chambers, and I had a chance to observe from the edge of the crowd. 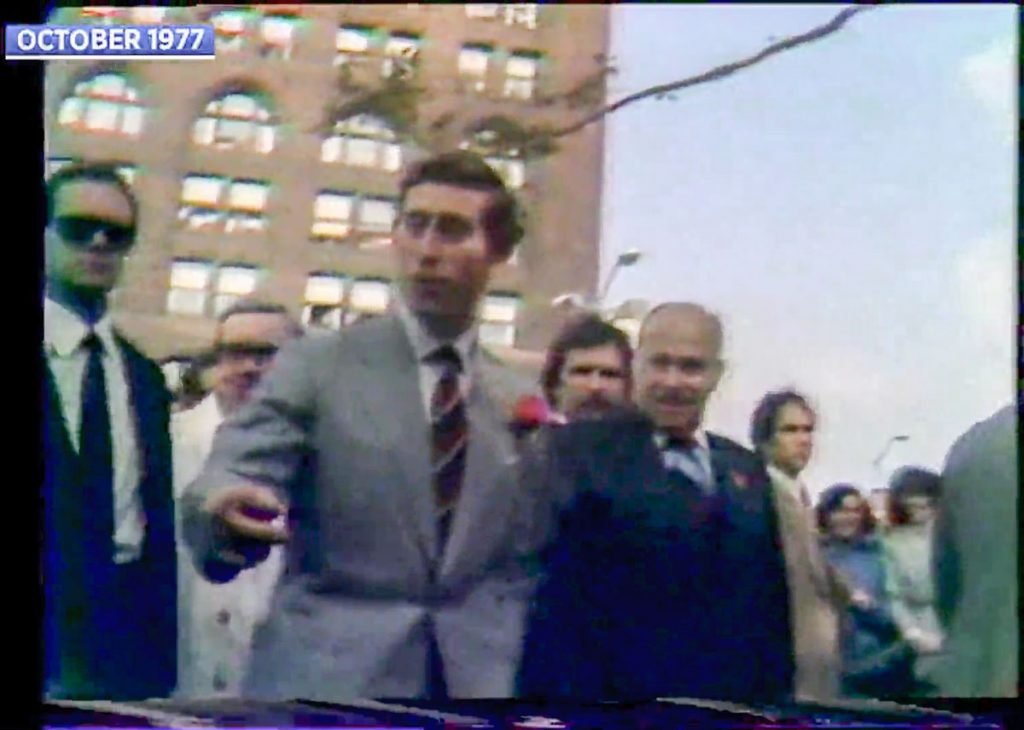 But Ron Kuntz had to cover for newspapers all over the country. He was fighting to get close for a good shot, but the prince was surrounded by dozens of cameramen and curious onlookers struggling to get closer. One more aggressive woman gave Kuntz a shove and knocked him to the ground. As he glanced up, he saw the prince, who was just about ready to dig the obligatory shovel of dirt, looking directly at him. With no time to spare, Kuntz grabbed his shot from the ground. The photo shows Prince Charles looking at Kuntz and his camera through the branches of a tree. 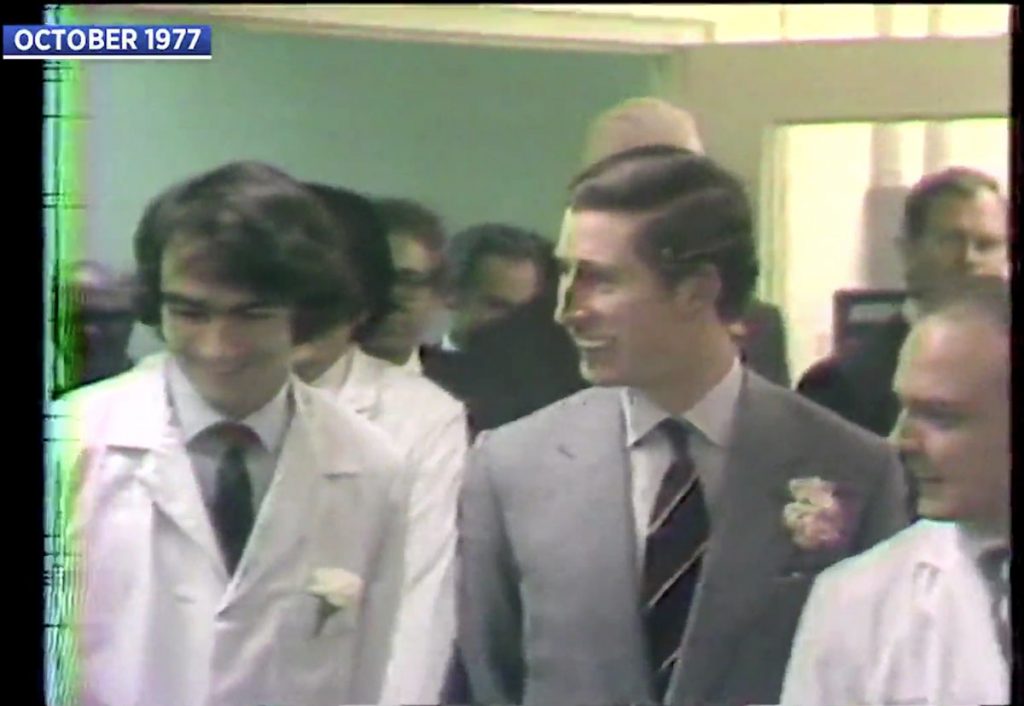 Later, our small entourage moved with the prince to the Cleveland Clinic, where he was to take a look at an artificial heart they were using and visit a then-new sports medicine complex. By this time we had been on the road all day without a break, though we had been furnished tea and coffee and other beverages at each stop with the royal party. So by the time we got to the clinic and its “nonpublic” appearance—meaning just the prince, a few dozen security people, clinic officials and doctors, and the pool journalists—my bladder was bursting. I kept looking for a restroom as we entered the research area but noticed that most were closed, probably as a security measure. Finally, while the prince was trying out a piece of exercise equipment, and we were in a well-guarded room, far from the public, I bolted out the door to try the handles on restroom doors marked “closed.” The first one was open. It was a small bathroom, just a toilet and sink. After I finished and washed my hands, the door suddenly flew open, and there stood a rather large man who I assumed was from Scotland Yard, because behind him stood a rather bemused Prince of Wales. Apparently it had also been a long day without a bathroom break for him. I was a bit embarrassed to be caught peeing in what was probably set aside as “The Royal Toilet” and, remembering our instructions not to speak unless spoken to, was trying to slink out of the bathroom when Prince Charles, smiling, asked me, “Did you wash your hands?”

“Good,” he said, walking into the bathroom and shutting the door.

After several more stops we ended the day as we gathered, at Burke Lakefront Airport, and the prince said his good-byes to local officials. Again we noticed him staring at Ron Kuntz and his beret. The prince sauntered over to him and asked, “Do you sell onions?” Nodding at Kuntz’s beret, he explained that onion sellers in Brittany wear berets like his and carry baskets of onions on their bicycles.

Before he left, Prince Charles paused at the door to his plane to greet the lone piper playing for the departure. The piper, in the regalia of a pipe major of the famed Black Watch, was Sandy Hain, who retired to Cleveland from the 2nd Battalion, 42nd Royal Highland Regiment, Black Watch of the British Army. Sandy had once been the bagpiper for Prince Charles’ grandmother, Queen Mother Elizabeth.

You can see video from Charles’s 1977 visit to Cleveland in this Fox8 interview with me from September 2022.

From the book Tales from the Road, © Neil Zurcher. All rights reserved.