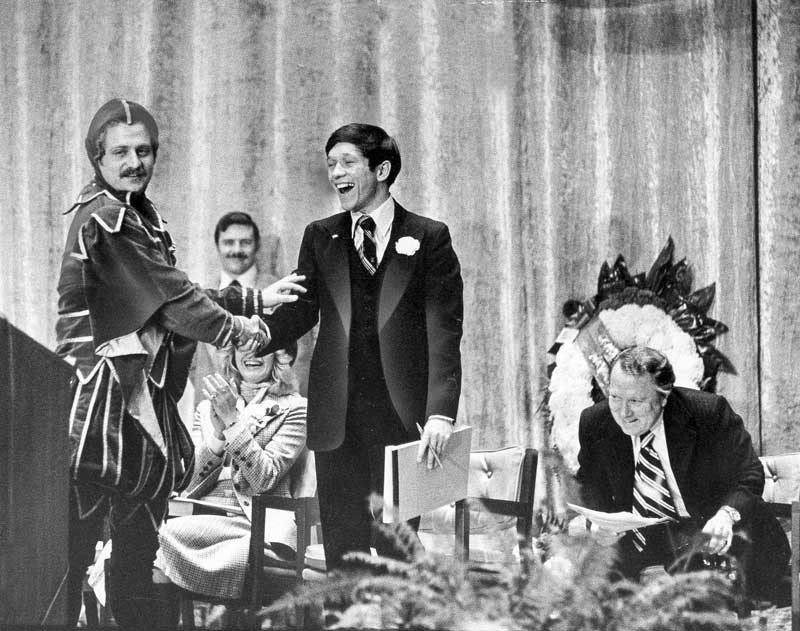 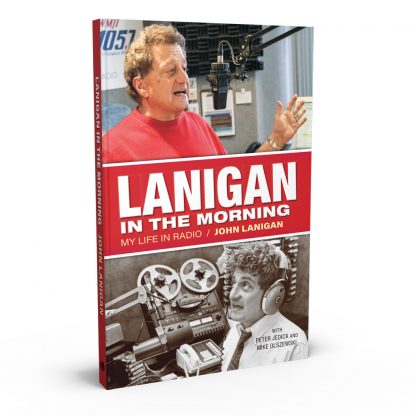 From Lanigan in the Morning, by John Lanigan, Peter Jedick, and Mike Olszewski

WGAR was a 50,000-watt blowtorch. That’s radio lingo for a station that didn’t have other stations interfering, and “the friendly station” could be heard in 38 states and a big part of Canada during certain times of the day. We gave them plenty to listen to as well. Every day part had a jock who put on a show like morning drive. Lots of interviews, impressions, jingles and a staff who could pull it off. All the shows had comedy bits and lots of telephone calls. It was personality-driven radio, and that was happening all over the country: WLS in Chicago, KOMA in Oklahoma City, and others.

There were a lot of great people at the station. The crossover at 10 a.m. with Joe Mayer came about by accident. Joe was a Cleveland legend when WHK was a Top 40 monster. We would talk at the end of my show sometimes and I would throw a few jokes at him. He’d laugh and take over, and I would leave. As time went on, I threw more at him and he laughed more and it became a daily bit, a big part of the show. Joe Mayer could laugh like no other!

We had taped bits like “Buzz and Juggs” about some geeky teenagers, and “Santa Hanukkah from Santa Monica” was a Jewish version of Kris Kringle. I believe Jan Jones and Bill Ward were part of the Buzz and Juggs bit. It was all produced locally.

Ah, the Flex Club. We wanted to say the Sex Club, but you couldn’t say that on the air in those days. I started that in Albuquerque by playing David Rose’s song “The Stripper” at 7 a.m. It was a crazy thing: “It’s the Flex Club folks! Get it up, get it on, get ready, get to work.” Then I took the Flex Club with me to Denver and we started adding in letters that people sent us to read on the air. We got a lot of mail, so we would read them over the music, using the song as a bed. Eventually people started calling in to the show to talk about it, and the bit kept getting longer and longer. It was supposed to be a minute lead-in to news, and it was going five minutes! At one point we even had Flex shampoo sponsor that segment. It ran its course and we had a lot of fun with it, but eventually I just retired it.

Was there a line not to cross on the air? We talked about politics, and relationships, but the line was in your head. George Carlin once had a bit about seven words you could never say on the air, but there was no real line you couldn’t cross. We didn’t go racist or mock religion. That was radio back then. You knew what you could do without having to say it. Maybe a few times there were guests who went a little too far, but you just restored order and moved on. The lines kept changing anyway. I didn’t attack other people. That was something that Howard Stern loved to do years later, but I didn’t do that at all. That was just my personal preference. That may be why Howard and Donald Trump became such good buddies on the radio, because they did the same kind of insults. I didn’t believe in attacking and insulting other people. Yeah, you can make fun of them and make jokes about them, and we did it about everybody, but never viciously or to insult them.

One thing that I started doing before I left Denver was having the mayor, Bill McNichols, on the show every week. Politicians give you credibility because most of them have been in the city their whole lives. It doesn’t matter if you like them or you don’t. We actually became friends.

It worked in Denver, so when I went to Cleveland and started on WGAR, I invited Mayor Ralph Perk on the show. He agreed, I got to know him right off the bat and he helped get me known because we had a regular thing on the air. Nobody else on radio at that time was putting politicians on the air. He was on once a week, letting everyone know what was going on. He helped me immensely by getting out the word that I wasn’t just some outsider passing through.

Eventually I came to know his whole family, so I kind of got involved in politics through him. If I had a problem, and I had quite a few of them in my early years, I’d call him and he’d help me out. Here’s an example:

You have to promote a successful radio show on and off the air. I was asked to be the Grand Marshal for the city of Parma’s Fourth of July parade. This was kind of a big deal because I was new in town, and a lot of people still didn’t know me. So on the Fourth I pulled up to park next to the mayor’s car and a cop told me, “Hey! You can’t park here! This is restricted.” I tried to tell him I was in the parade, but he came back with, “You still can’t park here. You’re going to have to go somewhere else, you understand?”

“I’m not going to go anywhere else,” I replied. “I’m the Grand Marshal of the parade and I’m going to park here.” Well, one thing led to another and before you knew it, he had arrested me. The parade started and I heard someone ask, “Where’s John Lanigan? He’s supposed to be the Grand Marshal.”

The next thing I knew, I was at the Parma jail with one phone call. Who you gonna call? Not Ghostbusters. They were still a few years away. So I rang up Ralph Perk and gave him a thumbnail account.

“Sorry, John,” he said, “I can’t do anything for you. I’m heading to the airport and I’m flying out in about two hours to go to Washington, D.C. to see the President.”

Perk must have felt sorry for me. He called somebody, who called somebody else, and the next thing I know the jail door opened and the cops said, “We’re sorry about this. You can go now.” The parade had gone on without me.

I also became friends with the guy who replaced Perk, Dennis Kucinich. Still am.

We had him on the air a lot when he was running for mayor, so when he was elected he told me that he wanted me to be on the dais with him for his swearing-in ceremony at Cleveland Music Hall. I didn’t understand why.

“You were part of it,” Kucinich responded.

And he wanted me to speak!

“I don’t have anything to say! “I protested, but Kucinich stood his ground. Then I had an idea. “If I have to do it, I have to do it my way,” I told him.

They had a number of people up on the dais and they had me sitting next to Louis Stokes, the congressmen, and former Mayor Carl Stokes’s brother. They had quite a lineup of people speaking on behalf of the new mayor, and they brought Stokes up after two or three speakers. I was supposed to be next, but I ducked out of sight and changed into a court jester’s outfit. The whole suit, and it looked pretty good. So Stokes finished up and went back to his seat and the master of ceremonies introduced me, but I was nowhere to be found. He didn’t seem pleased.

“That’s just like those media people,” he said. “They’re never on time and they’re never prepared when we’re ready.” As he was saying those words I casually strolled out to the podium as a court jester. The place exploded! I told him I would do it my way, and had a good reason behind it.

My idea was that Cleveland had been a joke for too long. We were tired of being made fun of as the “mistake on the lake” and all the rest of it. So I stood up at the podium and said, “Well, we got a new guy at City Hall. He’s young, he’s aggressive and he’s going to be interesting. And you know what? We’re not going to be laughed at anymore. We’re going to laugh back, and that’s why I’m up here, to let you know that we’re not going to take it anymore.”

I felt sort of like a renaissance Howard Beale. It got a great response, too. It made it all the way to The New York Times. The article was about Kucinich’s election, but it also mentioned the court jester who said we’re not going to be laughed at anymore. You can laugh at me, but not the city.

We’ve stayed friends over the years and have been involved in a lot of other things together. Oddly enough, people forget that he ran for president twice. You’d see him during the Democratic debates with all the other big candidates. Hey, he might have been the outsider who didn’t have much of a chance, but there he was. Gotta give him credit for that!

Kucinich had had a pretty tough life. He once told me that he wanted to sell his house in Washington, D.C., and move back to Cleveland. I said, “You’ve come a long way from living in your car, haven’t you?” You know, at one point in his life he actually was living in his car. He didn’t have anywhere to live. He just kind of smiled and he said, “You’re right, John. I have come a long way.” He made it a point to call me on my last day at WMJI. He was stuck at Fox News in Washington, but I sure appreciated that call.

From the book Lanigan in the Morning, © John Lanigan. All rights reserved.