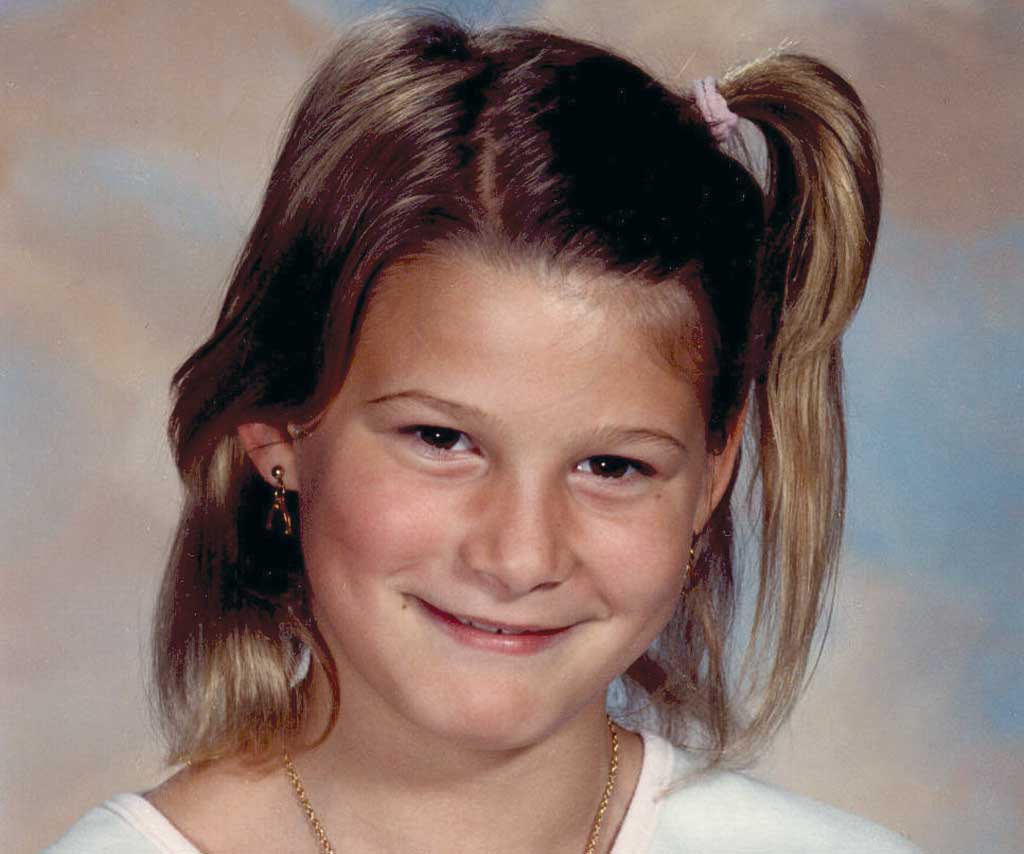 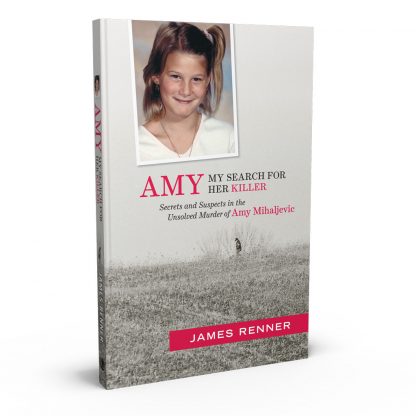 From Amy: My Search for Her Killer, by James Renner

The day Amy was taken, Bay Village was enjoying an Indian summer. Though it was late October, a balmy breeze cut off Lake Erie. It was the last breath of summer warmth before the world fell cold again until spring.

A little after 6 a.m., Amy awoke and dressed herself. Sweats again. She picked out green pants and a pale green sweatshirt with lavender trim. She brushed her hair and slipped on her favorite earrings, silhouettes of horse heads rendered in turquoise, mounted on gold studs.

On the way out the door, Amy put on a white windbreaker; it was still a little chilly first thing in the morning. She slipped on a pair of black riding boots, laced up the front. She slung a blue denim book bag with red piping around her shoulders, having recently grown too old for that silly koala backpack.

Outside, she climbed onto her blue antique bike and met up with Kristen Balas and Katy from down the road. Together, they pedaled to the middle school.

The students’ schedules were abbreviated that day thanks to an assembly at the nearby high school. Amy and her friends climbed onto buses for the short ride. Olivia Masiak, who was new to Bay Village but had become fast friends with Amy, sat alone as the other students stepped inside.

“I remember you, you’re Liv! I haven’t seen you in such a long time!” Amy shouted, pretending that they had just been reunited after twenty years. Amy was always play-acting with her friends. She slid into the empty seat next to Olivia. They sat next to each other at the assembly and listened to officer Mark Spaetzel talk about the dangers of strangers. (Masiak and several other students remembered the talk taking place at the high school assembly; Spaetzel, though, recalls giving it in Amy’s classroom at the middle school.)

Later, Amy ate spaghetti for lunch in the school cafeteria.

For many of her classmates, the school day was nothing special. Events meshed together with the days and years that came before. It’s hard for most of them to recall when they last saw Amy alive.

Renee Moran later told a reporter that she thought Amy had been oddly quiet the whole week. Elizabeth Jeffers remembers talking to Amy near her locker sometime on Friday, though she cannot pinpoint a specific time. Kristy Sabo recalls passing the door to Amy’s classroom and seeing her friend scribbling on a piece of paper.

Classes let out that day at 2:10 p.m. for the fifth-graders. Normally, Amy would reclaim her bike from the rack, but this day she left it behind.

“Can I walk with you?” she asked Olivia Masiak, as she jogged up beside her.

“You never walk this way,” said Olivia. (Amy would normally have been on her bike.)

A few minutes later, they crossed in front of the shopping plaza.

A classmate named Haley Pritchard, walking a few steps behind them, watched Amy dart over to a black van. It looked like Amy knew the owner of the vehicle. But then, Amy stepped away and walked toward Baskin-Robbins. She did not go into the ice cream shop. She stood outside, swinging around a pole, keeping her head down, apparently lost in thought.

Across the street, almost every cop in Bay Village was assembled for a weekly staff meeting called by Chief William Gareau. A few patrol cars remained on duty. Around 2:30 p.m., one of those cruisers pulled into the plaza.

Outside Bay Lanes, a group of older kids nervously watched the officer approach. Dan Monnett, Nicky Kline, Jill Prochaska, and Dave Kotinsley were skipping last period, enjoying the last perfect afternoon of the year. The cruiser stopped in front of the gang, and the officer stepped out to give them a stern talking-to. Avoiding the cop’s eyes, Dan looked over to the girl in front of the ice cream shop and watched her swing around in lazy circles.

Less than twenty feet from Amy, Jim Kapucinski loitered outside his barbershop, surveying the parking lot. Not that there was much to see. His business was empty, as was everyone else’s, practically. There were only five vehicles parked there, and those probably belonged to the employees of the other various shops. He casually monitored the teens standing by Bay Lanes.

A fifth-grader named Julius Holinek was in the plaza, too. He was the second eyewitness that Maddie did not want to name. And he also watched Amy twirl around. However, it’s hard to say exactly where he was standing. Though he witnessed Amy’s abduction, he has remained silent about the crime. As of this writing, he was living in Florida, having graduated college as a star football player. He did not respond to repeated interview requests. His parents said the experience was too troubling for him to remember. But he was, after all, able to live his life.

It was around 2:45 p.m. when Maddie approached Baskin-Robbins.

“Amy!” Holinek called out. It sounded like a taunt to Maddie, so she watched him to see if he might bother Amy. And she watched as a well-dressed man in a beige jacket walked up to her instead. He leaned forward and whispered something in Amy’s ear. He put his arm around her and led Amy away.

Must be her dad, Maddie thought.

Ten minutes after 3 p.m., Amy’s brother Jason arrived home. He called Margaret’s desk at Tradin’ Times and told her Amy was not there.

A few minutes later, Margaret’s phone rang again. It was Amy. Margaret assumed Amy was calling from home. Amy told her mother she had stayed after school for choir auditions. But she seemed odd, as if she was rushing the conversation along. It so unnerved Margaret that she packed up her things for the weekend and left work early.

Margaret pulled into the driveway on Lindford Drive at around 4 p.m. Jason was there. She soon realized Amy had never been home. She also realized Amy must have lied to her, though she couldn’t understand why. It wasn’t like her. Maternal instinct kicking in, she rushed to the middle school. Amy’s bike was still in the rack. It was a detail that terrified Margaret. It seemed to suggest something terrible. Things were off-kilter. This was not routine, not normal. She had never known Amy to lie.

Later, Margaret would learn it was only the promise of surprising her with a present that caused Amy to make a series of poor choices that day.

From school, Margaret drove to the police station and relayed her feelings to Officer Barbara Slepecky. Slepecky did not waste time treating Amy as a runaway, which is standard protocol. She believed in Margaret’s instincts. Somehow she knew this was the real deal.

A call went out to officers in surrounding towns at 5:58 p.m. The call included an incomplete description of Amy.

Mark Mihaljevic, unaware of the growing storm that would batter his life, arrived home from work at 6:30 to find his family fractured. He spent the rest of the evening scouring Bay Village with a friend. He drove his car down every street between his house and Holly Hill Farms, between the school and Huntington Park. He trampled through ravines and woods, calling his daughter’s name in all directions.

At 11 p.m., thanks to the efforts of Jeanne Silver—then Jeanne Sabo—Amy’s face was broadcast on the local news channels. Ohio was introduced to Amy Mihaljevic for the first time.

From the book Amy: My Search for Her Killer, © James Renner. All rights reserved.