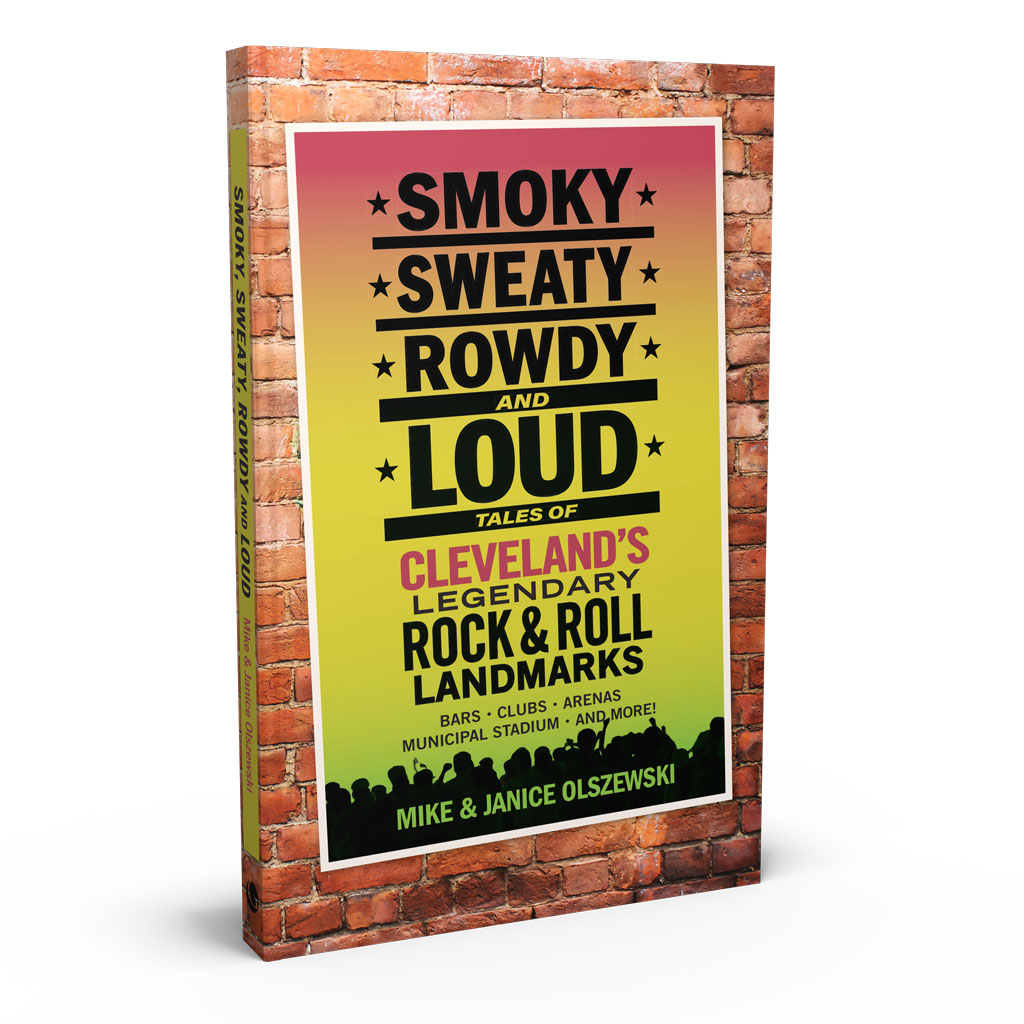 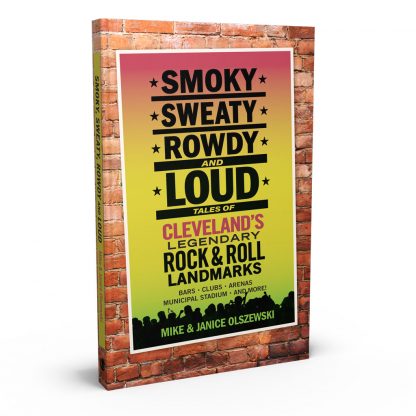 From Smoky, Sweaty, Rowdy, and Loud, by Mike and Janice Olszewski

Hotels and rock stars have a long, twisted history. Debauchery reigned at the “Riot Hyatt” on Sunset Boulevard in Los Angeles, where Robert Plant stood on a balcony and screamed that he was a god. The Who are still under a lifetime ban from Holiday Inn after Keith Moon drove a Lincoln Continental into the swimming pool at the brand’s Flint, Michigan, location. And New York City police dodged cherry bombs thrown at them from a window after—here’s that name again—Keith Moon blew up the plumbing flushing explosives down the toilet at the Gorham Hotel. Just about every city has horror stories about rock stars, and very likely Moon, but everyone loved coming to Cleveland because of Swingos’ Celebrity Hotel.

Jim Swingos and his family were entertainers in their own right. Artists came to town knowing the hotel had a top-rated restaurant, a superior wine list, exceptional security, and an owner who was very lenient as long as you paid your bills. They all paid, too—plenty, and word got around in the rock and roll community that Swingos’ was a safe haven in a great market.

Swingos had been a well-known name on the local restaurant scene for years for the Keg and Quarter and got rave reviews when it moved into the Downtowner Motor Inn in 1967. The old restaurant operator owed $12,000, and that’s what Swingos paid for the lease. The restaurant always drew, but hotels were suffering in the downtown area. Who would come to Cleveland, and why? When the opportunity arose in 1971, Swingos bought the hotel, renamed it, and started to refresh its 150 rooms into an oasis for visiting entertainers. People were still coming for the restaurant, but he had to get “heads in beds,” and that was a pretty tough sell. Then he got a call from Memphis. Elvis Presley’s tour was looking for a base of operations, something centrally located to travel to and from tour dates, with Cleveland as the hub. As the Plain Dealer reported, it was “One hundred rooms, three floors, and enough room service to keep the chefs working overtime—and Elvis had run up a $20,000 bill.” And Presley loved the location. Reports say Presley’s manager Colonel Tom Parker stopped in to check out the place on a Wednesday and Swingos had a special menu with fatback, corn bread, and collard greens. That scored some points, and the Colonel called Presley in a day early to see for himself. The paper also reported that Presley had certain demands. It quotes Swingos saying, “Elvis ordered a Boston strip steak and a chopped steak, a simple order. Then I took it up to the room and he says, ‘OK, now cut it up into little pieces.’ I did. Then he looks at ’em and says, ‘Now, put ’em back together.’ ”

Presley’s manager apparently took a liking to Swingos. One day they were sitting in the office talking about Presley’s upcoming stay when the Colonel heard Swingos discussing terms for a show booking in the bar. Swingos later told a reporter, “Suddenly he cussed me out and told me to put the call on hold, which I did. He told me to insist on all the money up front for a week run with Jerry Lewis, Connie Stevens, and Pat Boone. I don’t know why, but I did what he told me. I got the money up front. The show closed after three days. Ticket sales were zip after the third show. I don’t know how he knew that. But he did.”

The King was one story, but there also was the Chairman of the Board. When the Coliseum at Richfield opened in 1974, Nick Mileti booked rooms for Frank Sinatra and his entourage at Swingos’. This was a big deal, but “old Blue Eyes” was said to be very demanding. Swingos got on the phone with Sinatra’s personal chef, found out that he loved fresh apple fritters and was a big fan of hot peppers. Swingos stocked his favorite dinner wine, Montrachet, and left plenty of lighters around in case he wanted a smoke. On his first night, Sinatra sat down to dinner, Swingos sent over the peppers and stood out of sight to see if they passed muster. Reports say Sinatra tried one, threw down his fork and said, “Goddamn! These are the best peppers I ever had!” Giant sigh of relief!

Sinatra was in for another surprise.

On the day he checked out, Sinatra asked for the bill and Swingos said it was on the house. No way! Sinatra insisted he wanted to square up but Swingos wouldn’t hear it. After a moment, Sinatra told Swingos to gather the hotel staff in the lobby, and then he went down the line with his bodyguard and handed each staffer a $100 bill. He told Swingos the hotel was like a new home, and he visited a number of times after that.

Many other artists were welcomed just as warmly, but they had bills to pay.

You can’t ignore TVs dropping out of windows. Hey, someone has that room after you! A young Elton John reportedly ordered everything on the room service menu along with a number of bottles of expensive wine, took a nibble here and a sip there and then sent all of it out his window. Ian Hunter with Mott the Hoople was quoted as saying you remember checking in and out of Swingos’ and nothing in between, and the Rolling Stones would spend an entire month taking up three floors satelliting out to various cities but always flying back to Cleveland. Now, those stories about Led Zeppelin.

When Zeppelin was at the Waldorf Astoria New York to be inducted into the Rock and Roll Hall of Fame in 1995, there was some lingering tension over the omission of bassist John Paul Jones from the Page-Plant tour. It was announced that there would be photos but no questions in the press room—as if that would stop anyone. When they took the stage, a shout rang out, “When are you coming back to finish the demolition work on Swingos’?” Jimmy Page turned with a big smile and proudly said, “Cleveland!” Zeppelin would use Swingos’ as a tour hub, having a major, and often destructive, party just about every night. They went on in several rooms, and one guest once saw drummer John Bonham walk in and tear down two masts from a four-poster bed. He looked around with a shrug and said, “drumsticks.” Very young girls and hangers-on were everywhere, each trying to outdo the other. Swingos recalled at the end of the tour he would walk from room to room with a tour accountant who clicked off damages on an adding machine. “How much for that bed?’ “$2,000.” “For a bed?” Swingos would say, “Industrial bed!” Never an argument. The accountant would total up thousands of dollars and ask, “Do you want that in cash, check or bank transfer?” They would make the transaction, shake hands, and it was “See you next tour!” Zeppelin had big fun, and Swingos got three floors of newly remodeled rooms.

Swingos also gave Bruce Springsteen a break on rooms early in his career when he couldn’t afford $15 a night. They settled for $8 a room, and Springsteen always remembered that after his star rose dramatically. Not all rockers had such fond memories.

In a Plain Dealer story, Swingos recalled a fateful night saying, “I got a call at my house at 4 a.m. It was Yul Brynner complaining: ‘This Deep Purple band is driving me crazy making noise.’ So I showed up and saw Brynner going at it with Deep Purple guitarist Ritchie Blackmore.” Swingos took a stand, saying, “I told that [expletive] Blackmore ‘Can’t you have some respect for Mr. Brynner?’ ” Blackmore is said to have called Brynner “a little French gypsy.” They soon found themselves on separate floors.

Swingos’ had such a stellar reputation that director Cameron Crowe not only insisted it be included in his film Almost Famous but demanded authenticity down to the pattern on the carpeting, which was only seen for a few moments in the film. Bette Midler also tipped her hat in one of her songs, though she mentions it was in Seven Hills. Hey, artistic license.

Swingos’ didn’t draw just rock stars. There were sports teams, actors, businessmen . . . lots of folks. You might even see Gene Simmons of Kiss with then-girlfriend Cher. But as a rule they didn’t tear up rooms. Even so, all were welcome.

By the mid-’80s Swingos decided to move restaurant operations to the Statler Office Tower, and the old location became a Comfort Inn and later, dorms for Cleveland State University.

One last story before we turn the page on Swingos’. Record companies often held promotional parties at Swingos’, which brought media people out in droves. One famous party had folks packed wall to wall, and a guy dressed as a policeman and mumbling incoherently handcuffed WMMS’s Kid Leo to a young blonde. Then he left with the key! The fake cop? Who else? Keith Moon!