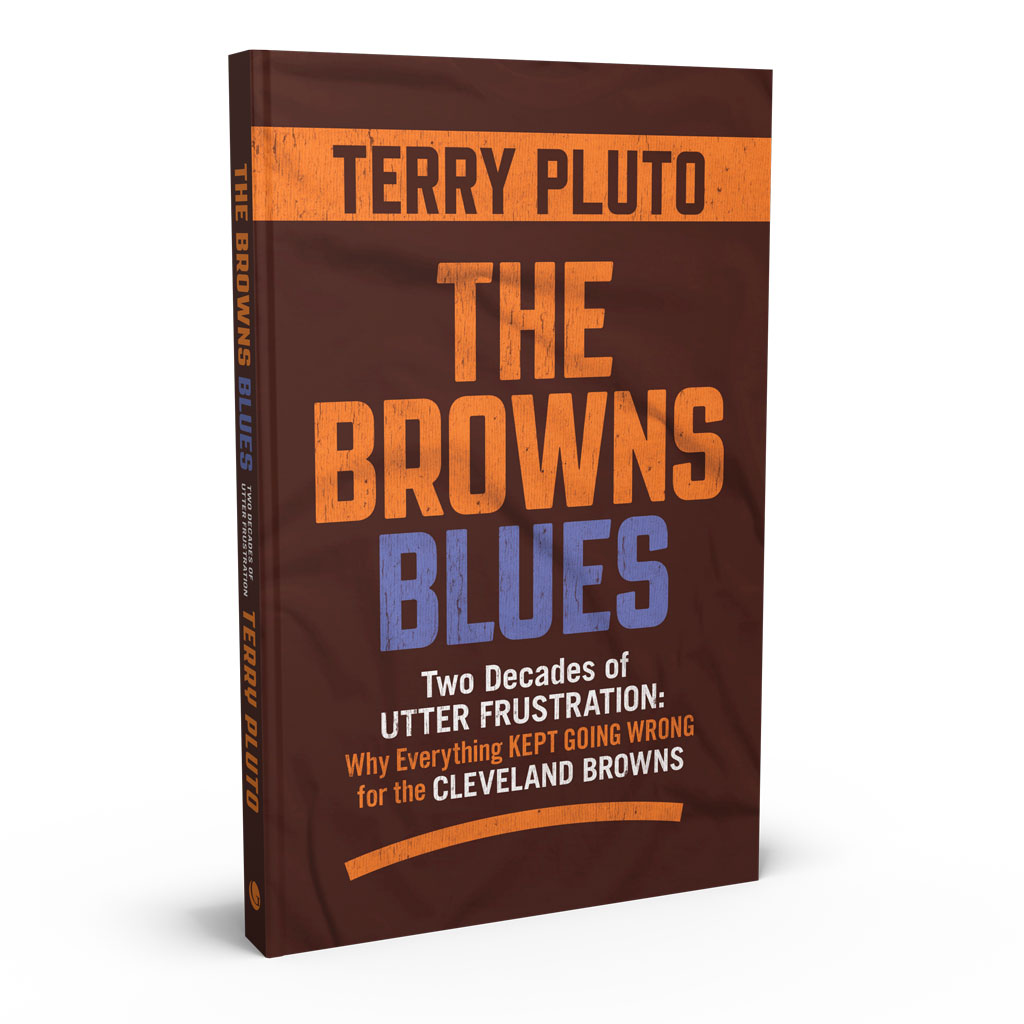 From The Browns Blues, by Terry Pluto

“If you’re the guy who fixed it, it would be so much fun.”

I can’t confirm this, but I often heard Randy Lerner had promised his mother that he’d keep the Browns for 10 years.

Randy took over as owner when Al Lerner (his father) died of cancer on October 23, 2002. The sale of the Browns to Jimmy Haslam was announced on August 2, 2012.

Banner also was aware of the 10-year rumor, although he didn’t know what exactly was behind it.

“Before hardly anyone heard it, I was told Randy wanted to sell the Browns,” said Banner. “He didn’t want anyone to know. He didn’t want to get involved in a long, complicated process. He wanted to quietly do it.”

He is chairman of a New York based law firm called Proskauer, “a renowned Sports Law Group,” according to its website.

Leccese has been involved in the sale or acquisition of the Buffalo Bills, Jacksonville Jaguars, Houston Astros, New York Jets and Philadelphia Eagles. That’s also according to his website.

Leccese is friends with Banner.

Banner was looking for a new challenge after 18 years with the Philadelphia Eagles. He had spent the last 12 years as team president. But he longed to really be in charge of a franchise. He had helped hire Andy Reid as the Eagles coach in 1999, and that led to the Eagles becoming a power in the NFC.

Leccese had heard Randy was open to selling the team. Part of Leccese’s job is knowing who would be viable buyers for NFL teams. Jimmy Haslam had been a minor owner of the Pittsburgh Steelers since 2008. He was very interested in buying his own team. He knew it would not be the Steelers. The Rooney family loved the franchise and planned to keep it.

Leccese was aware of Haslam’s desire to own a franchise.

“He called Jimmy and said the Browns could be bought, but they were not officially on the market,” said Banner. “The Browns had yet to hire an investment banker. But it seemed Randy really did want to sell. Jimmy said he was interested in Cleveland.”

That led to a discussion between Leccese and Haslam about who’d run the franchise. The Haslam family owned Pilot Flying J—a huge chain of truck stops across the country. The corporate headquarters is in Knoxville. Haslam said he didn’t want to move to Cleveland. Leccese talked about the need to have someone in Cleveland run the team for him.

Leccese brought up Banner, who was open to leaving the Eagles for the right opportunity.

In June of 2012, the Browns issued a statement denying the team was for sale. Another time that month, team president Mike Holmgren did the same.

Also in June, Banner was meeting in Martha’s Vineyard with Jimmy Haslam and his father.

Leccese had brought Banner and Haslam together. Banner and the Haslam family had several meetings.

This is not new.

When the expansion Browns were on the market in the late 1990s, Carmen Policy was introduced to Al Lerner by Dennis Swanson of ABC Sports. Swanson was friends with Al Lerner. Policy’s daughter was looking to work in television. A casual conversation about Policy’s daughter with Swanson led to Swanson later telling Al Lerner, “If you are serious about getting the Browns, you need to call Carmen Policy.”

Policy and Al Lerner combined forces. They emerged as the group that won the bidding war for the Browns in 1999.

Keep that in mind as you read this discussion of the sale to Haslam.

Banner was excited about the opportunity to help Haslam buy the Browns. He saw it as a revival of his career, an incredible professional challenge.

“I wanted to go somewhere that had been a total failure,” said Banner. “Really, I mean that. I wanted to go to a team that was awful and be the guy who fixed it. The Browns were a huge challenge, but that appealed to me.”

In 2012, no NFL team fit that description better than the Browns. They had a 53-100 record since Randy took over as owner in 2002. It was similar to Policy joining an expansion team in 1999. Cleveland was a football-crazed market with so little to cheer for.

Just some success would be greeted with loud ovations for those who could bring it to town.

“Cleveland is a great football market,” insisted Banner in 2017. “If you’re the guy who fixed it, it would be so much fun. It would be unbelievable.”

Jimmy Haslam met with Randy Lerner. The goal was to determine the price Randy had in mind.

“We’re wasting our time unless the numbers are going to begin with a ‘B’,” Randy Lerner said.

“We had been tipped off,” said Banner. “For a billion dollars, he’d sell the team.”

Something else was helping the sale along.

Randy Lerner was not interested in bringing in a high-powered investment banker to handle the deal. He was using family lawyers. Keep in mind, the Lerner family was in the banking business.

But the lack of an investment banker was a positive for both sides. Haslam also used his own legal people. Banner said this simplified the process.

“Right away, we realized we could get this deal done,” said Banner.

Al Lerner bought the Browns for $530 million, so Randy Lerner would nearly double the investment if he could secure his price of ONE BILLION DOLLARS.

In 1998, the NFL was putting the Browns expansion franchise up for an auction conducted by Goldman Sachs. I was at an NFL owners meeting at the Dallas Airport Hyatt Hotel. I talked to several owners about the Browns situation.

At one point, a few of us in the media chatted with Alex Spanos, owner of the San Diego Chargers, about what should be the price of the expansion team. Remember, the higher the price, the more each team received. It was going to be divided into 30 parts—every team getting a share except Art Modell and the Baltimore Ravens.

“A billion dollars is not unfair,” said Spanos. “I know it’s worth a billion. I don’t know if anyone will pay it.”

As Tampa Bay Bucs owner Malcolm Glazer said, “It will go to the highest bidder.”

Al Lerner recognized that. As he told us in the media: “The owners will see a number (bid) they like best and decide that person is brilliant.”

A few facts from the summer of 1998, when the NFL was seriously trying to build up competition between the various ownership groups bidding on the Browns:

1. In 1993, Carolina and Jacksonville had paid $140 million to become expansion teams. Five years later, the NFL realized that was too cheap.

2. By 1998, each NFL team was to receive about $75 million annually in national TV revenue.

3. Browns fans had bought more than 50,000 season tickets and 90 of 116 available luxury suites for a team with no owner, no coach, no players. And don’t forget all those fans also being forced to purchase the dreaded PSL—Personal Seat License. OK, they weren’t forced. But if you wanted a season ticket, you also paid extra for a PSL.

4. The main groups bidding on the Browns were Larry and Charles Dolan, Howard Milstein and Al Lerner. Others such as former Tribe owner Dick Jacobs and Bart Wolstein had dropped out or were eliminated by the NFL.

5. In retrospect, Al Lerner was probably the best man bidding. Larry Dolan is an honorable man and a solid owner of the Cleveland Indians. But he was connected to Charles Dolan, whose son James has been a disaster as an owner of the New York Knicks. Charles Dolan would have been the main owner of the Browns.

6. When I was writing False Start, Carmen Policy told me that Al Lerner nearly dropped out of the bidding. Lerner was appalled by the raw greed of the other owners, how they seemed to have little interest in what ownership group was best for Cleveland. In the end, Policy convinced Lerner to stay in the bidding, and bid high. Because in a few years, the franchise would be worth more.

7. The bidding became a media event. The winner was Lerner, at $530 million. The Dolan family was second at $525 million. The issue was decided on September 7, 1998. That gave the Browns one year and five days to prepare for the September 12, 1999 season opener.

8. The $530 million price tag became the highest amount paid at that time for any team in professional sports. The highest had been $350 million paid by Rupert Murdoch’s Fox Group for the Los Angeles Dodgers in March of 1998. The highest previous price for an NFL team was $250 million for the Minnesota Vikings.

Not only that, when Dick Jacobs sold the Indians to Larry Dolan in 2000, guess who ran the auction? It was Goldman Sachs. My theory was Jacobs paid the NFL the $150,000 fee to bid on the Browns so he could study how best to sell a team for the most profit. He knew he would soon be putting the Indians on the market.

But Randy Lerner did it quietly. He did it quickly.

In most negotiations involving money, the seller wants more—the buyer is interested in paying less.

This was a civil and honorable negotiation in the billion dollar era of sports.

But it still was about ONE BILLION DOLLARS!

Not only was that Randy Lerner’s price for the Browns, that’s what Jimmy Haslam was willing to pay . . . sort of.

“Even though we thought that was a good price, we wanted to get the best deal we could,” said Banner. “We stayed with the price of a billion.”

Haslam knew it was important for Lerner to be able to say he sold the Browns for ONE BILLION DOLLARS!

Haslam and Banner stayed with the ONE BILLION DOLLAR price tag. That would be the announced price.

Banner said there would be “no interest, no nothing” paid during the four years before the $400 million was due.

It was a way for the deal to move quickly. Randy Lerner could correctly say he secured ONE BILLION DOLLARS for the Browns.

“As far as I know, there were no other serious bidders,” said Banner. “Randy gave us all the documents we wanted . . . the financials, stadium lease, etc. He was great.”

“I liked Randy,” said Banner. “He is a bright guy, not arrogant. I sensed he cared about people and about the Browns fans. His character was good. He showed it in the deal.”

Banner said the sale took “less than 40 days to negotiate, that’s almost unheard of. For a deal this big, four months is fast.”

Banner said during the negotiations, it was obvious Randy Lerner “was absolutely ready to be done with the Browns. He wanted to move on as quickly as possible to the other things in his life.”

From the book The Browns Blues, © Terry Pluto. All rights reserved.