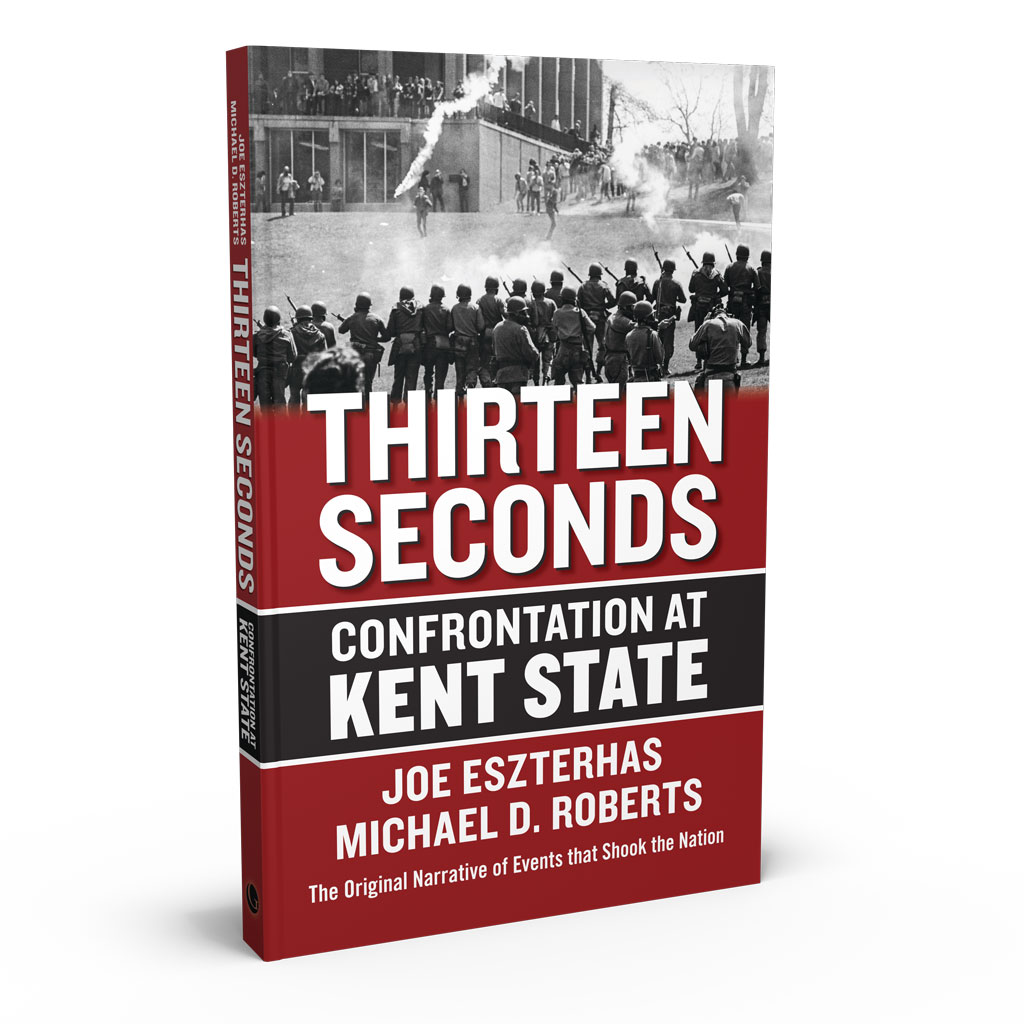 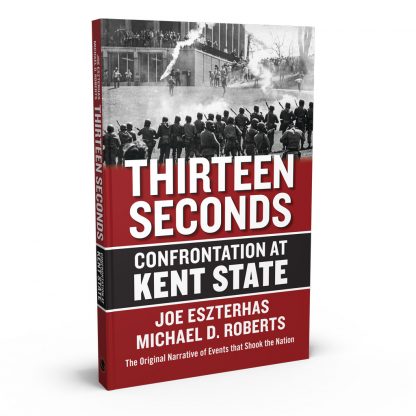 Joe Eszterhas and Michael D. Roberts reported on the May 4, 1970 shootings at Kent State University for the Cleveland Plain Dealer. They immediately began working on this book. Thirteen Seconds was originally published just months later, in fall 1970. Impressively, it still stands as one of the best narrative accounts of those tragic events.

Nearly 50 years later, the two authors looked back on the events and their reporting for a preface to a new paperback edition …

Nearly a half century after its publication, I’m still proud of the fact that Thirteen Seconds dared to speak the unspeakable: That Richard Nixon, allied with Ohio Governor James Rhodes and Ohio National Guard Director Sylvester Del Corso, helped cause the deaths of four innocent young people.

Through the use of inflammatory and demagogic words, President Nixon and his Ohio allies created a national climate of division and hatred, culminating in murder. Nixon and his allies didn’t actually pull the triggers of the Guardsmen’s weapons, but they might as well have.

The official history of the events at Kent State—James A. Michener’s Kent State: What Happened and Why—was the Nixon’s administration’s whitewash, written by a man with close ties to the Republican Party and the Nixon administration. The book was an obscene attempt to put the blame for the deaths on the victims themselves: the dead kids. I am proud that thanks to the very existence of Thirteen Seconds, that attempt failed. In a one-hour interview on the Today Show, Michael D. Roberts and I (with the legendary political pundit I. F. Stone) confronted James Michener and decimated him.

One of the great lessons of the horror at Kent State is that inflammatory political rhetoric, divisive and polarizing propaganda, can lead to violence and death.

I think it is worthwhile to keep that lesson in mind.

The killing of four students at Kent State University on May 4, 1970 by the Ohio National Guard was in a way the final, awful act of a tumultuous decade. Not since the Civil War, a hundred years before, had America found itself so torn and divided as it was in the 1960s, a decade full of acrimony, one generation pitted against another over civil rights and the war in Vietnam. It was the incursion into Cambodia in the spring of 1970 by U.S. forces that caused a demonstration that lead to the violence at Kent State. The deaths of those four students stunned a nation that never thought its youth to be at risk at home.

This book was written in the four months following the shootings and published that fall. Joe Eszterhas and I arrived on campus shortly after the shootings, and then spent days covering the tragedy for The Plain Dealer, the Cleveland newspaper for which we both were reporters.

It was an unpleasant task in many ways. First, the newspaper had failed to cover the story over the previous weekend when the tension was mounting in the city of Kent and a confrontation with the Ohio National Guard was forming. This meant that the paper was unprepared to cover what would be one of the tragic moments in history. (This was one of the factors that motivated us to stick with the story and write it as a book.)

Second, the emotion and agony surrounding the event gave one pause as to the course of the nation.

One could draw many parallels between America today and the polarization of the nation in 1970. The big difference would be the degree and the direction of that polarization. The Vietnam War divided the country not only politically, but also generationally. The draft would send thousands of young men to their deaths, and the contempt young people felt for older and conservative leaders was matched only by the bewilderment of older adults toward what they saw as a growing unruly and undisciplined element undermining society. These attitudes were noticeable as we set out to document what had happened over those few days in Kent. Neither side trusted our intentions in telling this story.

The collective experience Joe and I possessed played an important role in how we approached the story. Joe, only 25 years old, had a deep understanding of the youth culture of the time, and I—by virtue of covering the Vietnam War for a year—had some insights into the National Guard’s actions that day.

We divided the book between us, each responsible for certain chapters and personae. The hardest thing was spending hours with the parents of those killed and feeling their loss and pain. They could not understand why their children died on a campus seemingly remote from the turmoil that gripped the county. It was precisely that, the middle-class nature of the school, that added to the national shock.

Over the years, that fateful day has been revisited in seminars, articles, memorials, investigations, and government inquiries. In that time, no major revelation has come to light that would alter the facts in this book. True, many theories abound, some conspiratorial in nature, but nothing has been proven to support these theories of exactly what caused the Guard to shoot.

I believe that the first guardsman who fired from the hill on that day knows what caused him to shoot. Only he can answer why he chose to do so, and it is unlikely we will ever have that answer.

Over the years, Kent State remained with me in one way or another, too. The most ironic was my discovery, years later, that my father’s cousin, Major General Elvy B. Roberts, was the commander of the Cambodian Incursion in 1970 that indirectly resulted in the shootings at Kent.

President Nixon personally asked Roberts to lead the assault after a Vietnamese general, chosen to lead the operation as a symbol of the “Vietnamization” of the war, refused the assignment because his fortune teller predicted his death.

Read the previous sample from this book: Monday, May 4, 1970 – The Shootings at Kent State University

Back to top
Related Samples