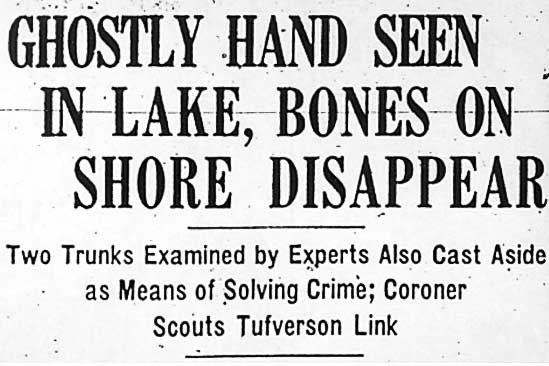 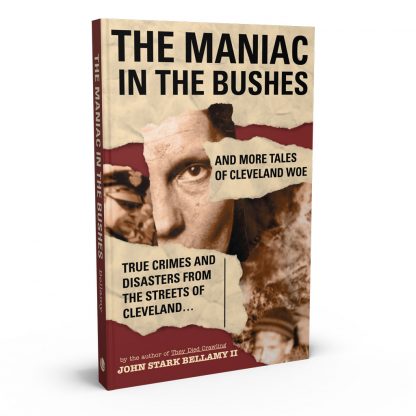 From The Maniac in the Bushes by John Stark Bellamy II

With the possible exception of the 1954 Marilyn Sheppard murder, Cleveland boasts no bigger or better “signature” crime phenomenon than the baker’s dozen of “Kingsbury Run Torso slayings” that terrified Clevelanders and puzzled lawmen during the latter part of the 1930s. It is Cleveland’s greatest and most malevolent mystery and hardly a year goes by without a renewal of media interest in this serial saga of Depression-era killings. It is no small irony, therefore, that when the “Torso” killings began on a gray morning in September 1934, there was no thought—much less a mention—of Kingsbury Run.

It’s even questionable whether it is proper to begin the Torso melodrama in the 1930s, much less in Kingsbury Run, the topographical remnant of an ancient stream that once fed the Cuyahoga River south of the Flats area. Headless torsos have ever been an attractive resort for killers with inconvenient corpses on their hands, and the first historical mention of a headless body found in the Run appeared in the Cleveland Leader on November 13, 1905. A poor woman scavenging for saleable refuse in a Case Avenue dump came upon the body of a man who had been fatally shot in the chest, decapitated, and dumped in the Run. No suspects were forthcoming, and the unsolved homicide was soon added to a roster of fascinating contemporary mysteries, like the brutal killing of Anna Kinkopf in Payne’s Pastures and the locked-room mystery of Minnie Peter’s hammer murder. Questions regarding the chronology of the Torso murders become all the more confusing when one discovers that for decades Cleveland police refused to acknowledge the Kingsbury killer’s first undoubted casualty—a headless human female washed up on the Lake Erie shore near Euclid Beach on September 9, 1934—as one of the fabled serial murderer’s hapless victims.

No one was thinking of Kingsbury Run in the late summer of 1934, least of all twenty-one-year-old Frank La Gossie of Beulah Park (a residential development just west of Euclid Beach Amusement Park) as he walked along the Lake Erie beach adjacent to his street that cloudy September morning. It was about 8:00 a.m., and La Gossie was up early collecting driftwood and cleaning up the beach area when he noticed something that didn’t look right sticking out of the sand. And it wasn’t right. It was, La Gossie soon realized, the lower half of a human torso. Neatly severed at the waist between the second and third lumbar vertebrae, it was still attached to the thighs, but its missing lower legs had been cut off at the knees. La Gossie ran to the house of his friend Charles Armitage at 12 Lake Front Drive, and Armitage telephoned the Cleveland police, who took the torso to Cuyahoga County coroner Arthur J. Pearse at the Lakeside morgue.

Examination of the torso that afternoon by Pearse and his assistants disclosed all that was ever to be known about the mystery corpse. It was a female, most probably in her mid-thirties, five foot six, with a projected weight of around 120 pounds. The woman’s uterus had been surgically removed at least a year before her death, and the discoloration of her skin indicated that some kind of chemical—probably chloride of lime or calcium hypochloride—had been used on the corpse. (Coroner Pearse theorized that the presumed killer had tried to destroy the body with something like quicklime but had mistakenly used slacked lime, which preserved it instead.) Nothing else could be ascertained from the torso, except that it was not waterlogged, suggesting that it had not been floating in the lake for very long. No other clues to the dead woman’s identity were found, and police began sifting through the sixty-odd files on women reported missing in Cleveland between January and July of 1934.

The mystery now shifted thirty miles away, far from Beulah Park and even farther from Kingsbury Run. Madison handyman Joseph Hejduk, after reading newspaper accounts of the murder, reported to Cleveland police that he had found some human remains on the beach near North Perry two weeks before. Previously he had informed Melvin Keener, a Lake County deputy about it, but Keener had concluded the remains were animal and persuaded Hejduk to bury his find on the North Perry beach. Extensive digging eventually unearthed Hejduk’s fleshly find on September 7: part of a shoulder blade, a partial spinal column, and sixteen vertebrae (twelve dorsal and four lumbar). All the pieces found in Hejduk’s beach burial matched the Beulah Park torso perfectly. They also revealed similar exposure to a lime-based chemical preservative. The next day, two brothers, Denver and Brady Fleming of Evergreen Street in Beulah Park, found a compatible collar bone and shoulder blade while digging in the sand near the original torso discovery.

In the wake of Cleveland newspaper headlines about these mysterious lakeside finds, less useful discoveries were also made by the curious. A clerk working in the Cleveland prosecutor’s office recalled an incident six weeks before at a Lake Erie beach area near East 238th Street in Euclid. A fourteen-year-old girl had run screaming out of the water, crying that she had stumbled over a pair of human legs about fifteen feet from shore. The legs had not been located, nor the “ghastly hand” that another Cleveland girl had espied “waving” from the Lake Erie waters a week before Labor Day. The latter girl’s father corroborated his daughter’s story and further averred that he had actually stepped on the ghostly hand‑.‑.‑.‑but he had become too distracted by other matters to tell the police about it at the time.

The police would soon begin to lose patience with the growing number of torso clues, including a “gray mass” thought to be a human brain, found by two boys at the foot of East 256th Street (it proved to be suet); a steamer trunk found not far from the first torso find by two boys from nearby Bonnieview Drive (it, like a small box unearthed from the North Perry beach by a young boy, proved valueless in the search for either the killer or the identity of his victim); and a sensational report out of Painesville that a woman’s liver had been found on Lake Road near Willoughby (this lurid news was not even investigated by weary Cleveland sleuths). Nor did any concrete clues emerge from a fruitless search for a skull made after two fishermen reported snagging strands of blond hair in their lines off the shore by West 58th Street.

The police and Coroner Pearse did the best they could, having little forensic or circumstantial evidence to go on. Miles of odoriferous neighborhood sewers were searched by detectives, and hundreds of residents of the Euclid Beach and North Perry areas were quizzed for clues. But without the unknown woman’s head or an unequivocal match to a missing person report, it was impossible to say who she had been. One baffled detective confessed, when asked by a reporter whether it was a perfect crime: “No, but so close to being perfect that we don’t know what to do next.”

Lack of conclusive evidence, however, did not dissuade Coroner Pearse from theorizing about the how and why of the mystery torso to avid reporters. Pearse’s initial judgment was that the body was dismembered by someone with professional medical skill, although he qualified this judgment in light of later evidence that the presumed killer had cut straight through the shoulder blade instead of around it. Pearse was probably correct in his conjecture that the body had been cut up and placed in three separate packages, which were then dumped into the lake from air, water, or land—possibly even from as far away as Canada. The grisly parcels then simply floated until the containers disintegrated and washed up at various locations on Lake Erie’s southern shore. It was even possible, Pearse allowed, that the body was that of a suicide that had been later churned to pieces by the propeller of a passing ship. After consultation with authorities at local universities, the possibility that the body had been the result of some medical-school prank was ruled out.

Even Cleveland’s newspapers were somewhat at a loss to properly contextualize the appearance of the autumnal torso at Beulah Park. Old-timers recalled the Pearl Bryan case, a macabre 1896 murder in which a headless, and indubitably pregnant, torso was eventually identified by means of some unusual shoes. Younger reporters resurrected the tale of the “Battersea Body Mystery,” the 1925 discovery of a red-headed male corpse—with its face beaten to an unrecognizable pulp—on Lake Road. (Ten thousand Clevelanders had viewed that corpse at the county morgue in a vain effort to identify it.) More historically mindful souls wondered whether the torso belonged to Betty Gray, the still-missing star witness at the first William Potter murder trial in 1931 or to Miss Agnes Tufverson, a well-to-do lawyer who had disappeared shortly after her marriage to Captain Ivan Poderjay, a notorious Yugoslavian bigamist and adventurer. On September 6, the Cleveland News offered a $1,000 reward for information leading to the arrest and conviction of the killer. Like all rewards for the Torso killer or killers, it was never collected.

After five days of sensational headlines, the nameless torso—christened “The Lady of the Lake” by romantic copydesk personnel—disappeared from the headlines. The collected remains of the female victim were placed in coffin No. 102/3 and carefully buried in the Potter’s Field section of Highland Park Cemetery at 10:00 a.m. on September 11. Clevelanders moved on to other matters and other murders.

No one had yet whispered the chilling name “Kingsbury Run”. . .

From the book Maniac in the Bushes, © John Stark Bellamy II. All rights reserved.

Buy the book
Back to top
Tags: True Crime, Cleveland History
More Samples from this Author