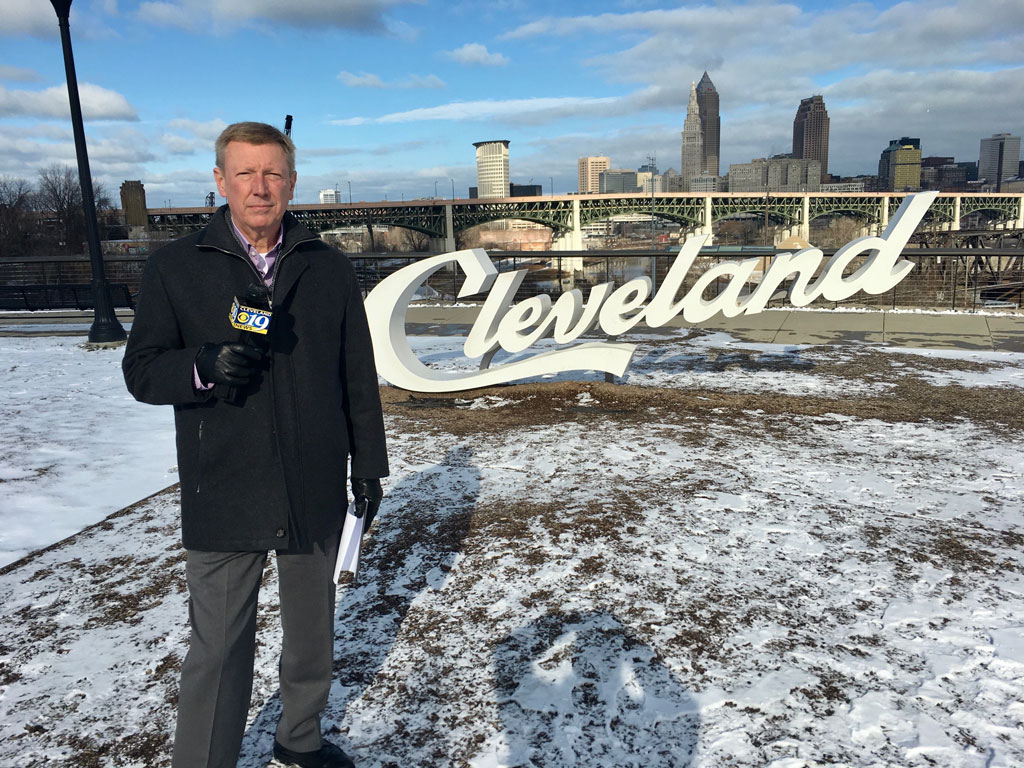 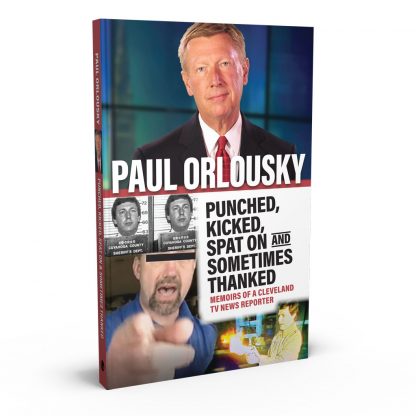 Winter is an interesting time of year to be a TV news reporter out on the streets of Northeast Ohio. My least favorite live-shot assignment of all time was going out to stand by the side of the road to tell people it was snowing. But sometimes a story with a winter angle turned out to be a winner. Here are a couple of stories from winters past …

TV news loves bad weather. I laughed one time when I was the lead story on a bad snowstorm. The message to viewers from our weather people was, “Don’t even think about going out. Stay in your home.” That was followed by the anchor saying, “We sent Paul Orlousky on a three-state tour to survey what is going on . . .” Wait, what?

On the way to Cleveland Hopkins airport, cameraman Tom Livingston and I shot some video of local bad weather. We landed in Cincinnati, where the airport is located across the Ohio River in Kentucky, and shot some video of bad weather there. Two states down! Next it was on to Huntington, West Virginia, which was hardest hit. As the plane was approaching the airport and we were just about to land, the engines suddenly revved and we climbed back into the sky. The pilot came on the intercom. “We’re going to come around again. There was a snowplow on the runway.” I looked at Tom and asked, “Don’t they have radios at this place?” We landed and got our story. But the assignment desk hadn’t checked the flight schedule. There was no return flight. They had to send a charter plane to get us. It arrived and we made it back to Cleveland just in time for the 11 p.m. news.

It was just a routine story to cover at WEWS. Not a lot of fanfare had been made about it. A movie was being made on downtown’s Public Square. It was a bit unusual at the time, as not many movies were shot in Cleveland in the early 1980s.

The last big one had been The Deer Hunter, in the mid-1970s, which used exteriors of St. Theodosius Cathedral in the Tremont neighborhood. (Much of that movie was shot in Pittsburgh, with a shot or two filmed in Youngstown.) In 1977, interiors of the penthouse at a building then known as the Chesterfield, on East 12th Street near Chester Avenue, were used for a scene in The Gathering featuring actor Ed Asner. The movie-making scene in Cleveland had been dry since then.

The new movie being filmed in Cleveland was A Christmas Story, adapted from a book by Jean Shepherd. Yes, the same movie that is now a classic holiday ritual for so many.

The movie company made a deal with the City of Cleveland to purchase late 1930s- era Christmas decorations for Public Square if the city would agree to keep the decorations displayed until movie filming was done in February. The city quickly said yes, as the decorations from past years had outlived their usefulness.

Christmas came and went, and the movie crew moved in that January. My assignment was to cover a big parade scene that was to be shot at night. It is the scene where Ralphie looks into a store window display and falls in love with the idea of getting an “Official Red Ryder Carbine Action Two Hundred Shot Range Model Air Rifle” for Christmas.

It hadn’t been a particularly cold winter in Cleveland, so the snow you see in the movie was heavily augmented with soap bubbles as a kind of filler. Many locals who owned vintage cars from that era were involved. Modern phone booths were covered by postwar-looking bus stops. A gospel choir from a historic Black Cleveland church is the one singing in the parade. All went well. (I have seen old tapes of my coverage from that night; I was about thirty and looked like a child myself with my excitement.)

A day or two later, I went inside the Higbee department store to interview Peter Billingsley, the actor in the role of Ralphie. It was Higbee’s store window that Ralphie was looking into on the corner of Euclid and Ontario when he obsessed on the Red Ryder BB gun. Between two escalators was the Santa Mountain made famous in the movie. The place where Ralphie at first couldn’t spit it out, then while being tossed down the slide on the mountain by an elf, stops and asks Santa for the Red Ryder. The spot where Santa listens and says, “You’ll shoot your eye out, kid.” (By the way, that Santa Mountain elf who sits the kids on Santa’s lap is from Cleveland. And yes, I have a leg lamp!)

At the top of Santa Mountain, I interviewed Peter Billingsley, who played Ralphie. I always kind of dreaded doing kid interviews; but he was particularly good. Over the years, I have met many of, and even worked with one of, the children waiting in line to see Santa in the movie. They were local extras. Most were young and don’t have a lot of memories of the filming. Elisa Olgin, whom I worked with at WOIO, remembers that Billingsley was “very nice” and that they had a great place to hang out between scenes. She said, “Even had pinball machines and stuff like that, that Peter liked.”

The movie didn’t do much at the box office. Years later, though, the TBS television network picked it up for its now-annual Christmas Eve and Day marathon, which made it into a classic.

Some of the actors from the movie returned to Cleveland over the years to sign autographs and make appearances. My favorite was Zack Ward, who played bully Scut Farkus. In the first return appearance by the cast, I did a story about it. I had to think of a creative way to “tease” ahead to the story, which would air later in the news broadcast after the first commercial break or two. I had Zack put his arm around my neck from behind, kind of a choke hold. He did that Scut Farkus growl, and I said, “All these years later, and he’s still a bully, I’ll explain.” He was a good sport to play along with us.

Read another sample from this book: What Have I Gotten Myself Into?

Read the previous sample from this book: Don’t Trust Donny Osmond on Live TV with a Magic Marker