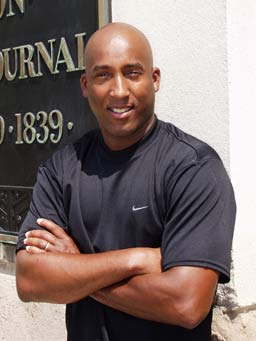 David Lee Morgan, Jr. was a sports reporter for the Akron Beacon Journal from 1995 to 2010, where he won several awards for his coverage of high school sports, including the James A. Sutherland Award, given to the top rookie reporter in Northeast Ohio. He is a former high school and collegiate athlete.

Who is LeBron James and where did he come from, really?
Most audiences want to know what LeBron was like as a kid raised by his single mom (Gloria) and how he became such a great basketball player. The story is mind boggling and an inspiration to all.

Was LeBron a good student at St. Vincent-St. Mary?
Morgan discusses LeBronÕs dedication to his classwork not only in high school, but in middle school as well. Morgan also talks to his audience, especially middle and high school students, about the importance of doing well in school and being disciplined when it comes to study habits.

As an adult, why am I such a LeBron fan?
Although you may see LeBron as a superstar on television and helping the Cavaliers win, you’re attracted to his whimsical and carefree attitude. That’s exactly what makes LeBron so unique and why kids of all backgrounds feel like they live right next door to LeBron.