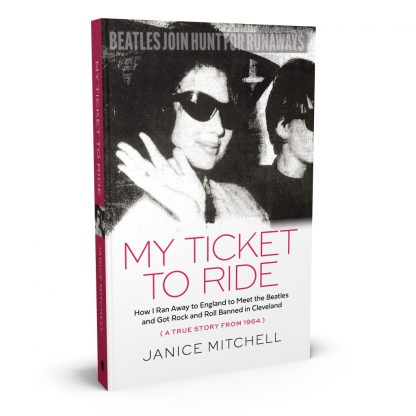 From My Ticket to Ride, by Janice Mitchell

It was Christmas break, 1963, and I sat in the kitchen trying to stay awake while writing a homework essay. Homework during break just wasn’t fair, but it had to be done. I turned on the large portable orange and white radio that was my lifeline to the outer world, pointed the telescoping chrome antenna toward the window, and turned the dial to 1420 WHK.

Some of the popular songs on Cleveland radio that week were “Since I Fell for You” by Lenny Welch, “Deep Purple” by Nino Tempo and April Stevens, and “I’m Leaving It Up to You” by Dale and Grace. Pretty tame. The liveliest song going was “Louie Louie” by the Kingsmen, a song that kids weren’t supposed to listen to because some adults thought it was suggestive. I didn’t even know what suggestive meant. The radio stations played it, and we danced away.

Instead of working on my essay, I tapped the sharpened tip of my yellow No. 2 pencil to the beat of “There I’ve Said it Again” by Bobby Vinton. I had nothing against Bobby Vinton, but the tune was kind of boring. Then “Popsicles and Icicles” by The Murmaids: I’d heard it about a million times. I glanced down at the few sentences I’d written and stared out the kitchen window at the dark-gray, winter Cleveland sky. The wind whistled through the trees, and, as usual, it was cold and snowing.

“Dominique” by the Singing Nun came on. She sang it in French, so I didn’t know what she was saying, but she had a sweet voice and accompanied herself on an acoustic guitar, which was cool for a nun. Even though teens couldn’t dance to it, the song was in the number-one spot on the Billboard Top 10. As an Irish Catholic girl who went to a Catholic girls’ high school with nuns as teachers, I had to love this song or risk going straight to hell upon death—or maybe even sooner. All the nuns went wild, so to speak, over this accomplishment by one of their own. I heard a nun or two humming the tune as they passed by in the school hallway, amid the normal nuns-wearing-habits sounds, the jingling of keys, rosaries, and crucifixes.

I turned the dial from WHK to KYW. A new disc jockey, Jerry G, had just arrived at KYW from Chicago. Chicago—the big city I knew of only because that’s where my mother went with her boyfriend after abandoning her three children and husband. I didn’t hold that against Chicago, though. Maybe, I hoped, this new disc jockey brought some records with him that we hadn’t yet heard in Cleveland.

Jerry G was on, announcing a new group with a one-word name. Beagles? I didn’t hear the name clearly. Then, a sound I’d never heard before. The guitar chords and harmony electrified me. I jumped up from my kitchen chair, grabbed the radio with both hands, and held it close, straining to hear every note, every word.

The song was “I Want to Hold Your Hand.”

After the song finished, Jerry G announced the group’s name again: “And that was the Beatles . . .” He described them as a new singing sensation from England.

I almost knocked my chair over as I lunged for the yellow telephone on the kitchen wall. I grabbed the receiver and called the station. Busy. I redialed. Busy again. I must have dialed the number a dozen times hoping to speak to Jerry G and ask him to play the Beatles song again, but I couldn’t get through. Every kid in Cleveland must have been calling.

The Beatles! I wanted to hold their hands too, and right then. The words presented such a simple, yet powerful, request. I needed someone to hold my hand. I’d never experienced that feeling before. I couldn’t think of anyone who had held my hand with love, ever. Holding someone’s hand meant they thought you were worthwhile, that they cared about you. It meant that they were telling you everything was going to be okay, that you were not alone in the world.

My heart wanted that.

I had to see what the Beatles looked like. I wanted to learn everything about them—as soon as possible. Now, aside from seeing Jesus in heaven, I had something to live for.

From the book My Ticket to Ride, © Janice Mitchell. All rights reserved.